The city of Kyle's wastewater treatment plant is experiencing a failure which could lead to potentially 1 million gallons or more a day of partially treated effluent releasing into Plum Creek if not fixed in the next few days.

The city of Kyle announced Tuesday the wastewater treatment plant staff will install a pump system at Plant 1 this afternoon that will mimic the function of the center well system following a mechanical failure Sunday.

According to Division Manager Jason Biemer, the pump will be coming in from Houston and the goal is that have the pump running by this evening.

In a news release, Biemer also said a new replacement part for the center well was located and a contractor will verify its compatibility with wastewater treatment plant's existing structure.

“We anticipate having the components replaced and plant operations fully restored over the course of about a month,” Biemer said.

The city of Kyle is working to fix a failure in its wastewater treatment plant that, if not fixed over the next few days, could release about a million gallons or more of partially treated effluent into Plum Creek each day.

The center well-bearing system in one of the city's two plants that began failing on Sunday, according to city spokesperson Kim Hilsenbeck.

The center well-bearing system moves the rakes above and below the water line around in a circular motion. Those rakes pass along the wastewater solids to the next phase of processing, and return them into the start of the treatment process.

"The window for repairing Plant 1 is short—several days at most—to prevent overtaxing Plant 2 and causing partially treated effluent to enter the creek," Hilsenbeck wrote in a release.

Division Manager Jason Biemer said in the release he believes the first step in repairing the plant is installing temporary pumps to mimic the circulation process to keep the solids moving through the clarification process. He said this option is the city’s most viable and cost-effective solution at this point in time. A secondary option would be to bring in a mobile, temporary wastewater treatment system.

The news release listed the following steps the city will take to resolve the problem:


The treatment staff is collecting regular samples on the effluent but it takes several days or more to get the laboratory results, according to Hilsenbeck.

Public Works Director Harper Wilder recommended that people and animals downstream of the plant stay out of the water until the issue is resolved.

According to the news release, partially treated effluent can cause an overgrowth of bacteria in the creek water. It could lead to a reduction in overall water quality which could impact  and even kill fish and other organisms in the creek. It could also lead to fines from TCEQ for permit violations.

“Our staff are working 24 hours a day to resolve the issue and get the plant back on track,” Wilder said. 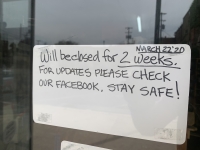 The latest: Here is a breakdown of 24 coronavirus cases in Hays County

Hays County coronavirus cases include residents between 20 and 69 years old.

Live updates: These restaurants in San Marcos, Buda and Kyle are offering curbside, delivery or takeout

Learn how area restaurants are adapting to restrictions that closed dine-in services.

Shelter-in-place order FAQs: Find out what is and is not allowed under the order

A shelter-in-place order was issued by Hays County Judge Ruben Becerra on March 25 in an effort to reduce physical contact between residents during the coronavirus pandemic.