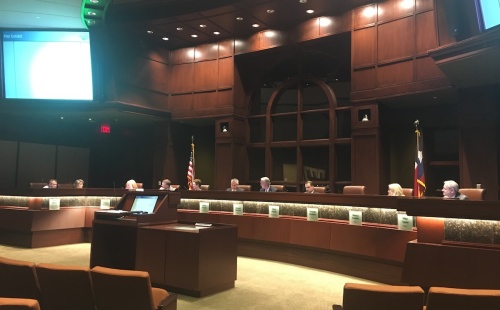 The Colleyville City Council approved the purchase of new cameras for police vehicles at its meeting on Nov. 21.

After several questions, Colleyville City Council approved the purchase of an in-car police camera system for all police vehicles during Tuesday's Council meeting.

"It is a critical component to the police department," Hinton said, adding that video evidence is an expectation of investigations with the district attorney and an expectation from the community, as well.

Hinton said the current system is 11 years old, requires constant attention from the city's IT department and has outlived its usefulness. The new camera system is state of the art and is able to take video inside and outside of the police car or motorcycle, he said.

"Unlike the old system, with this type of system if something major were to happen and [an officer] forgot to turn his camera on, the new technology will allow us to record after the fact," Hinton said. "...Theres a lot of very interesting features with this technology."

The council approved the new video system at a cost not to exceed $183,535. The system should be fully installed within two months.
SHARE THIS STORY