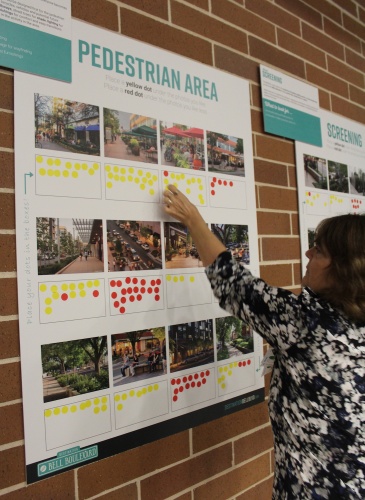 Workshop participants had the opportunity to provide the city of Cedar Park with feedback on different images of mixed-use developments to help define the direction for the Bell Boulevard project.

Readers can provide their input on the Bell Boulevard district to the city of Cedar Park by taking this poll: https://bellblvdpoll.typeform.com/to/qvkmbt

The city of Cedar Park held a public workshop Nov. 14 to give updates and solicit feedback on the Bell Boulevard redevelopment project.

The project will realign Bell from Buttercup Creek Boulevard to Cedar Park Drive, following the existing Old Hwy. 183. This will open up space for a pedestrian-friendly mixed-use district.

“It truly is so energizing as city staff and members of this project team to see this much interest from the public,” Cedar Park Assistant City Manager Katherine Caffrey told attendees at the public workshop. “What we’re really looking for is your help to define the heart of Bell Boulevard.”

Residents were invited to take a survey and participate in activities at the event to help the city gauge the direction it should take for the character and identity of the district, said Rebecca Leonard, a consultant on the project from Lionheart Places. For example, on a large poster, participants could place yellow dot stickers on images of pedestrian areas they liked, and red dots on images they did not like.

Caffrey and Leonard gave presentations at the meeting to explain the project and its timeline. Caffrey said goals for Bell’s redevelopment include creating a place with:


“Bell Boulevard is the only area in the city where sales tax collection has actually gone down, despite us being one of the most robust local economies in the entire United States,” Cedar Park Mayor Matt Powell said. “Let’s build a really great Bell Boulevard that we can all be proud of.”

Design for the roadway portion is projected to be complete in 2018, with construction taking place 2019-20, according to meeting presentation documents. At the end of October, the city of Cedar Park selected an engineer for the final design of the Bell realignment portion of the endeavor. Master planning for Bell Park is scheduled for 2019, with design in 2020 and construction set to be completed by the end of 2021.

The project will be a public-private partnership, with the city funding early stages through its general fund, 2015 general obligation bonds and sales tax revenue from the Type B Community Development Corporation, according to meeting documents.

Some residents and business owners said they were worried about the potential effects of the redevelopment on nearby neighborhoods and companies that may need to relocate due to the plans.

“I have concerns for the people who live on the street behind the proposed [US] 183, [Kings Canyon Drive],” workshop attendee Rachel Millar said. “It appears as though a lot of plans have been made, that [the city] won’t be able to backtrack from, if it doesn’t work for the new residents.”

Millar said she thinks her family, which lives within walking distance of the planned district, will enjoy the project once it is complete.

The survey offered to workshop attendees will be published online, according to city spokesperson Jennie Huerta. This article will be updated with the survey link once it is posted.

Readers can learn more at http://destinationbellblvd.cedarparktexas.gov.
SHARE THIS STORY