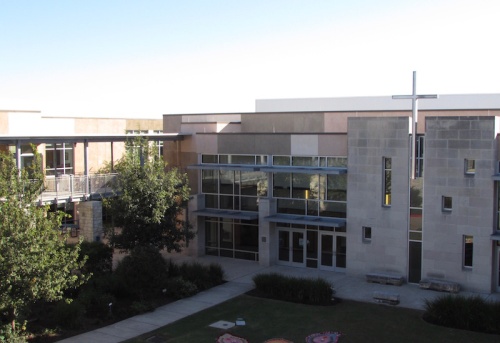 The improvements reflect an updated Trinity Episcopal School master plan that is separated into two phases. In Phase 1 the school will develop a property at 950 Westbank Drive, West Lake Hills, which it purchased in 2015 and currently houses an office building. Phase 2 will focus on reconstruction and remodeling of existing school facilities to optimize the space.

Head of School Marie Kidd said that although the project will add more buildings and space for the campus, it is not expected to lead to an increase in enrollment.

“This is not an expansion of our school, but a way of adding buildings to meet the [current and future] needs of our programs,” she said. “We are not building a high school, and we are not changing the size of our student body. This is really about the programs.”

Kidd said that based on preliminary plans for the Westbank property, the school could construct a community building that would include space for athletics and fine arts programs as well as local gatherings.

“We have a very healthy athletic program but have kids staying late into the evening to complete games,” she said. “We’re at the point that we would like to offer more programs but do not have anywhere to put them. The space lets us enhance the programs that we have now and will make sure we have the opportunity for new programs in the future.”

An access road off Westbank and additional parking spaces are also anticipated for the new property to improve area safety, traffic and parking, Kidd said.

“The opportunity to have a third entrance to campus that can alleviate some off the traffic on Camp Craft Road and Bee Caves Road just makes total sense,” she said.

The second phase of the master plan evaluates the structures that are currently on campus and how the space can be optimized.

“We have done just about everything we can to use every inch of the space that we have,” Kidd said. “We are looking to turn current spaces into spaces that are multiuse and give us the opportunity to be flexible in the future.”

Current plans for Phase 2 show that Blue House Hall, a one-story building used for kindergarten, first grade and lower-school administration, could be converted into two buildings that would offer more combined space, she said.

Kidd said the school intends to maintain “the beauty of our outdoor space” in Phase 2, including a greenbelt along the back of the campus that is used by science teachers.

Playgrounds could also be relocated farther away from driveways and improved for safety, she said.

The school would look for funding from the community and fundraisers as part of a capital campaign, Kidd said. Although a price estimate is not yet available, she said the project would cost “a good chunk of money.”

If plans are presented to West Lake Hills City Council and approved this winter, Kidd said she hopes the school could secure funding and be ready to begin Phase 1 in the next three to five years.
SHARE THIS STORY