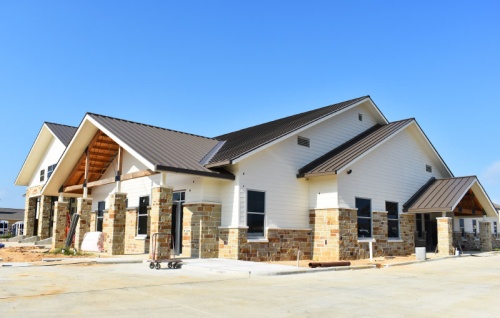 Firefighters will begin to occupy the new station in Gleannloch Farms near the Grand Parkway in December.

Emergency services districts in Spring and Klein are facing the challenge of keeping pace with development while also responding to the record-breaking floods that have swept through the area for three consecutive years, requiring special rescue equipment and vehicles.

As a result, each of the area’s four fire departments has completed or is working on plans for a new or replacement station as well as re-evaluating its flood response equipment and procedures.

“When we go to identify locations, we do extensive research on where it is in the flood plain because we don’t want to build a station that gets flooded,” said Mike Pate, commissioner of Emergency Services District No. 16, which contracts with the Klein Volunteer Fire Department.

ESD 16 plans to move firefighters into a new KVFD station before the end of the year, Pate said. Champions Emergency Services District, or ESD 29, also has plans for a new station, while Spring and Ponderosa fire departments have each replaced a station this year.

The flooding that occurred in communities along Cypress and Spring creeks in late August was unprecedented, Ponderosa Fire Department Chief Fred Windisch said.

“The word ‘horrible’ isn’t good enough,” Windisch said. “I have been here since 1975—this is the worst flood we have experienced.”

PFD’s out-of-pocket expenses from the storm totaled about $40,000, which includes $26,000 for firefighter overtime pay. The department, which serves a 13-square-mile area west of I-45—including a portion of
FM 1960—is funded by ESD 28.

“The Ponderosa and Westador subdivisions’ flooding was extensive,” he said. “We estimate 500 homes and businesses were affected.”

The department visited 264 homes and removed about 700 people over a period of three days during the storm, Windisch said. The event spurred PFD and other stations to re-evaluate their future flood response plans.

Windisch said the department has spent $25,500 so far on new equipment such as a boat, a new high-water vehicle and other water rescue equipment.

Assistant Fire Chief Robert Logan said the damaged vehicles were repaired and restored to service, but the department plans to budget $150,000 in capital purchases in 2018 for more boats and high-water vehicles.

“With the rapid growth in our area, we are now focusing more on advanced training for our personnel and the purchasing of more rescue [and] evacuation equipment,” Logan said.

Klein Volunteer Fire Department planned a fall opening for its Station 8 at 9600 Crescent Clover Drive in Spring, but the department now plans to move into the building in December.  Although the new building did not suffer damage during Hurricane Harvey, storm response did delay the building schedule slightly, Pate said.

The 11,000-square-foot station will serve a 4-mile radius, including the growing Gleannloch Farms community, located near the Grand Parkway and Champion Forest Drive. The opening of segments F-1, F-2 and G of the toll road last year spurred development along the corridor, including the opening of a new H-E-B on Champion Forest Drive in April and several new shopping centers.

The $4 million loan for the station was obtained without a property tax increase because ESD 16 began collecting 1 percent of local sales tax revenue in portions of its boundaries in October 2015 and pledged sales tax revenue as collateral for the loan, Pate said.

ESD 16 collected more than $4 million in 2016 through sales tax revenue and is projected to collect $4.6 million in 2017, Secretary Steve Falkner said.

“We’re using that to cover growth or inflation, but it’s hard to project year-over-year what’s going to happen—property taxes could drop,” Pate said.

The district’s property tax rate has remained at 4.9 or 5 cents per $100 valuation for the last five years.

The station will house a fire engine and the tanker the district acquired this year to transport water to areas without fire hydrants. The ability to provide water to these areas will help the district maintain its Insurance Service Office rating, which is measured on a scale of 1 to 10 and helps determine how much residents pay in fire insurance. The ISO rating in areas of the district with fire hydrants improved from 3 to 2 this year, while those without hydrants within 1,000 feet are ISO 6, Shelor said.

The cost of the new station—about $2.5 million to $3 million—will be funded by a property tax rate increase in ESD 29. The district voted Oct. 12 to increase the district tax rate from 8.9 cents to 10 cents per $100 valuation.

“This was needed to fund the new station—both construction costs and staffing,” Shelor said.

The limit for ESD tax rates in Texas is 10 cents per $100 of assessed value. The district’s new rate means an increase of about $2 per month for the average homeowner within CESD’s boundaries, Shelor said.

Although Spring and Ponderosa fire departments are not building additional stations, each has recently replaced or is working to replace a station that had deteriorated over the years.

SFD began rebuilding Station 75 at 3915 FM 2920 in Spring earlier this year and expects to open the new building in February 2018, Logan said. The project expanded the 7,200-square-foot station to 17,800 square feet and provides accommodations for two engines and 11 firefighters.

The $7.6 million project was funded through the department’s regular budget without an increase in its tax rate, Logan said. The building was replaced due to mold growth.

The department also plans to rebuild its aging Station 74 on Aldine Westfield Road, but a starting date has not yet been determined due to delays in the permitting process, Logan said. The project will take one year to complete once work begins, he said.

ESD 28 completed work on the new  PFD Station 63 on Imperial Valley Drive in April, Windisch said. The original structure was made of metal and in need of a replacement, he said.

The new $5 million station includes a firefighter training center and was funded with an 18-year loan without a property tax rate increase.

“Our growth is primarily commercial, and our apartments are full, thereby causing more responses due to the population density,” Windisch said.

The greatest area of growth in the district is in commercial areas along I-45, near where Station 63 is located. The station is also set to obtain three new fire engines in early 2018 as part of its continual apparatus replacement plan, at a cost of $650,000 for each vehicle, he said.
SHARE THIS STORY