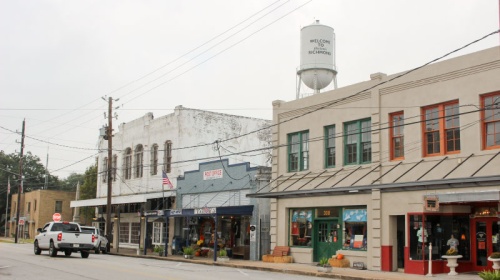 Richmond is exploring the possibility of revitalizing downtown through a state designation that would identify Richmond as a cultural district.


Historic downtown Richmond could take on a new designation if community members garner enough support and receive state approval to be recognized as a cultural district.

The Texas Commission of the Arts’ cultural district program helps create an area within a city or town that fosters cultural resources and in turn brings in business, development and revitalizes the community.

Over the past six months, Allehseya Hawk and Larry Pittman are two of three facilitators who have been working toward the goal of creating a cultural district in downtown Richmond.

“It becomes an economic engine for that community,” said Pittman, a retired Richmond resident.

After presenting the idea for a cultural district to the Development Corporation of Richmond and receiving favorable feedback, Pittman and Hawk have been actively working to gauge community support and formulate a concrete plan that would essentially transform downtown Richmond and future surrounding areas into a cultural hub that is intended to boost the economy.

Hawk and Pittman have formed a 20-person community advisory committee representing certain stakeholders within Richmond, including city and county officials, representatives from the Development Corporation of Richmond, merchants and residents from various neighborhoods.

Guidelines for the district are somewhat relaxed. Community members have an opportunity to decide what kind of district they would like to see in Richmond.

There are many steps to creating the district, according to Hawk. The specified area must qualify for designation by meeting requirements that include having features that are within a walkable radius of each other, which the downtown area adheres to.

“It’s not a replacement [of the downtown area],” Hawk said. “What it allows us to do is to put historic downtown Richmond on the map at the state level and makes us eligible for funds to revitalize that area.”
Although plans for the district are aimed at the downtown area, Hawk said this could change as time passes and the district continues to grow.

Pittman, Hawk and a third facilitator, Donna Kachinski, released a community survey in October to measure community support and raise awareness about the potential district. Proposed features mentioned on the survey include green spaces, such as gazebos and community gardens; community art, such as murals and outdoor street performers; hospitality upgrades that include bed and breakfasts and a hotel; entertainment features, such as outdoor art festivals and comedy clubs; and beautification projects.

“We have gotten responses from the city and from merchants and from the people that we work with in our community advisory committee, but we are waiting for the broader response from outside of the committee,” Hawk said.

Hawk and Pittman said the ultimate goal of completing the state’s cultural district program is to create a nonprofit that would use resources, such as local volunteers, companies and organizations, that would continue to donate to the area and help drive the growth of the district.

Hawk and Pittman said they plan to analyze the survey results in November and December and then create the three-year plan that would eventually be approved at the city and state level.

“Once you get that stamp of approval where we would qualify and we have a nonprofit, we would be eligible for partnership funding through [National Endowment for the Arts] and the different organizations from local to federal,” Hawk said.

Hawk and Pittman said officially forming the district and earning the designation will take some time to finalize, and they urge the community to take the survey and get involved in any way possible.