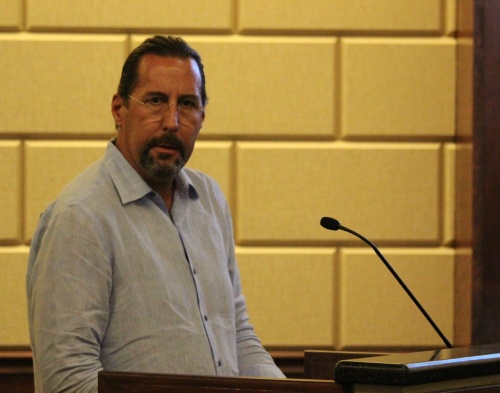 Bee Cave's Planning and Zoning Commission voted Nov. 7 in favor of a modified development agreement that would permit a 36-acre hotel/music venue located on Bee Cave Parkway adjacent to the city’s Central Park.

The latest site plan for The Backyard includes a limit of 1,900 ticket sales per event, down from earlier plans for more than 3,400. That was a nod to council opposition to the plan over concerns about traffic congestion at a single entrance and exit point off Bee Cave Parkway.

In July, city council in a tie vote, shot down the development plan since it did not have a second access to Hwy. 71, a plan which would require agreement from other private landholders.

Several residents spoke at the meeting including Ladera homeowner Steve Schmidt who was concerned with concert goers using his neighborhood which lies on the other side of Bee Cave Parkway as a cut-through to the venue.

Commissioners expressed concerns over the traffic that second access point could bring.

“I’m torn,” Commission Vice Chairman Jim Norman said. “I miss The Backyard, we need more music. But being a resident of Homestead I’m not a fan of more traffic on [Hwy.] 71.”

Developer Christopher Milam told the planning commission his solution involves paying to extend the length of a left turn lane from Bee Cave Parkway into The Backyard to limit any traffic overflow into main westbound lanes that lead to the Ladera subdivision. An eastbound turn lane would also be built.

City staff recommended the latest amendment, citing their own traffic control studies conducted last fall that showed very few projected delays on concert evenings thanks to the longer turn lanes as well as a long drive inside the venue that would stack traffic for up to two thirds of a mile on the way to two planned parking garages on the site.

Commissioner Andrew Clark, was the sole opponent to the amended proposal, reminding the commission Bee Cave City Council in December voted to oppose the original proposal unless it had dual major road access.

“It seemed it was important based on the vote, for council for there to be access to [Hwy.] 71 before any of these buildings, venues were operational. We’re in a way circumventing that. It doesn’t seem to be much has changed.”

So far, Milam says his group is spending more than $60 million developing The Backyard. That includes more than $3 million for proposed road improvements off the site and $19.8 million in on-site infrastructure elements, he said.

Milam told Community Impact Newspaper he hopes to get building sometime after the upcoming holidays.

“Perfect should not be the enemy of the good here, said Commissioner Jim Miles who voted for the proposal. “There’s a bigger balance here. I'm not saying we should be doing things that disrupt the life quality [of residents but] it’s apparent the applicant has tried to accommodate.”

The Backyard plan must still go before full city council for approval likely later in November.