$1.3B Lake Houston water plant expansion provides ‘water for the future’ of region 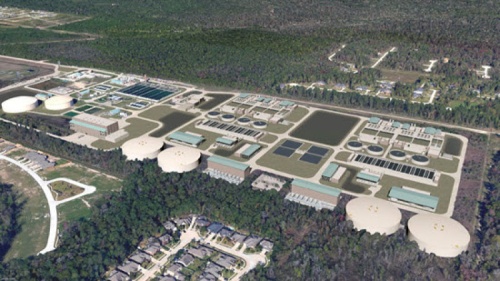 Area water authorities are moving forward with an overhaul of a dated water plant on Lake Houston that will increase the amount of water provided to residents across the region.

The original plant opened in 2009, said Al Rendl, president of the North Harris County Regional Water Authority, but the water quality in Lake Houston was worse than anticipated.

“The [plant’s] capacity was cut down and cut even further back around 2011 when we had the severe drought and tremendous rains in 2012 that washed so much organic material in the lake, making it very difficult to process the water,” he said.

All participating water authorities will sell bonds from the State Water Implementation Fund for Texas to pay for the purification plant, but area residents will also see a hike in water rates to help fund the project.

Rendl said water costs could reach a range of $5 per 1,000 gallons of water used per month, which is double than today’s rates, when the plant is complete.

NHCRWA manages water resources in northern Harris County, including Spring and Klein. In 2015, Rendl said NHCRWA received 31 million gallons of surface water per day from Lake Houston, of which about 60 percent went to Spring water users. The Spring customers who use surface water receive 60-90 percent of their water from Lake Houston, Rendl said.

To accommodate for growth and allow for more water to be treated, the project includes the construction of new purification facilities to connect to the existing plant, an intake pump in Lake Houston and expanding the pipeline that runs to the plant.

Two 108-inch pipes will carry the water from Lake Houston to the Northeast Water Purification Plant and will run alongside the existing pipe. Construction will not affect the current quality of water and existing operations, Rendl said.

“In addition, it will lessen our dependence on groundwater thus alleviating ground subsidence,”
Kaleyatodi said.