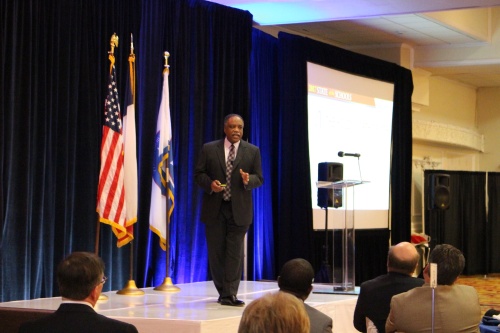 Lamar Consolidated Superintendent Thomas Randle made it clear during his speech at the Fort Bend Chamber of Commerce’s State of the Schools Nov. 1–Lamar CISD is a growing district that is only going to get bigger.

Lamar CISD spans 385 square miles, makes up 43 percent of Fort Bend County and is only 25 percent built out, according to Randle.

“That gives you an idea that there is going to be a lot of growing in Lamar CISD,” Randle said.

Over the next decade, Lamar CISD is expected to reach 55,000 students, according to the district’s demographer. Randle explained the importance of the district’s current bond election, and how it is critical to keep up with the growth Lamar has seen.

“Our population has nearly doubled since I’ve been in the school district, so every three years we have to go back to our constituents and ask them to support a bond issue,” Randle said.

Randle noted the board of trustees has kept the district’s tax rate consistent for the last seven years, and promised taxpayers and voters that if passed, their support for the upcoming bond will not go unnoticed.

“We work extremely hard to make sure we still offer the type of programs our kids needed but be prudent about how we spend the tax payer dollars,” Randle said.

Randle also touched on several major projects that include Z-Space, an augmented reality 3D computer that allows students to experience learning in a new way, as well as the district’s acceptance into the Holdsworth Center’s district leadership program. The Center helps districts enhance their leadership through methods that include benchmarking other successful districts from around the world.

“Everything that we do should be in an effort to make sure that our kids have an opportunity to be successful, and Holdsworth is assisting us with that effort,” Randle said. “The opportunity to go across the county and to benchmark against some of the best school districts in the world has been a journey that has been a very positive thing for Lamar CISD.”
SHARE THIS STORY