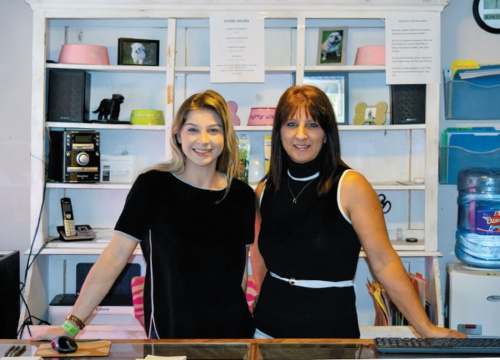 Local pet salon Pawty Palace, which sits in the middle of old Katy at 1402 East Ave., has become a family affair.

Jennifer Howard founded the business in May 2008 after holding a birthday “pawty” for her dog, store manager and friend Lisa Chalmers said. Howard turned the parties into a part-time business, combined with pet-sitting and grooming for Katy-area residents.

Chalmers was a stay-at-home mother when she joined her friend as a groomer and store manager in 2008. Together, they watched the client base grow and eventually, the parties subsided to make way for a full-time grooming business.

“It was, ‘We had one person today. We had three people today,’” Chalmers said. “Then it was, ‘Jen! We had a line! Somebody was waiting while somebody was checking out.’ She knew that we had turned a corner,” Chalmers said of Howard.

The salon’s most popular service is a full grooming, which includes a cut, nail trim and other basic touch-ups. Teeth brushing and medicated shampoos are complimentary, Chalmers said.

Every fully-groomed dog goes home with a bandana and treats.

Pawty Palace can also perform cosmetic teeth cleaning for dogs without anesthesia, she said. The salon staffs between two and four groomers each day and sees about eight dogs per groomer per day. Chalmers said Tuesdays and Saturdays are the busiest days of the week.

One of those groomers is Karen Marino, whose husband, Marc, bought the business from Howard in December 2015. Howard moved to Colorado and the Marino children, Rae and Austin, were already working at the salon.

Chalmers still manages Pawty Palace for Marc, who works at an oil and gas company in Houston. Rae can be found behind the front desk while Austin has since joined the military.

Chalmers said familiarity is important to their clients.

Pawty Palace books by appointment only. It serves cats and occasionally provides grooming services to other pets, including rabbits, guinea pigs and miniature horses.

The salon works with animals on behavior issues and does its best to help rehabilitate those pets, Chalmers said, adding consistent staffing helps pets get comfortable with their groomers.

“We love all the animals like our own,” she said. “We provide a consistent service, and I believe our prices are at least competitive, if not better than other places.”