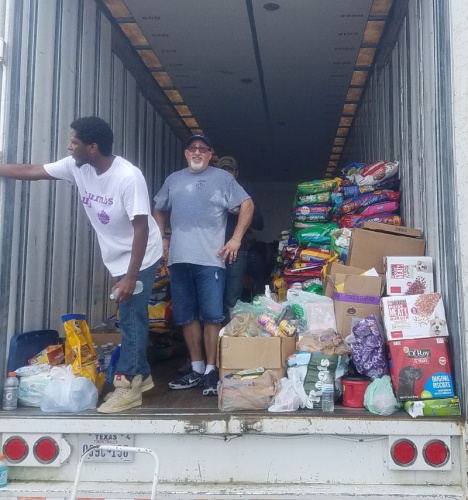 Volunteers work together to move supplies at the Austin Pets Alive! rescue center at Katy Mills in August. The organization said community assistance was vital after the storm.

Aside from property damage incurred during Tropical Storm Harvey, the disaster separated several Katy-area residents from their pets. Between Austin Pets Alive!, the Houston Society for the Prevention of Cruelty to Animals and Special Pals Shelter, more than 4,900 animals were rescued and 242 have been reunited with their owners.

APA! rescued about 3,000 of those pets through its staging area at Katy Mills, APA! Director of Communications Mary Heerwald said. Houston SPCA took in more than 1,200 pets and farm animals as well about 700 wild animals for which they provide shelter and veterinary care.

As of Oct. 5, Special Pals Shelter at 3830 Greenhouse Road, Houston, had 142 pets in their charge, 115 of which were at its facility and the remainder in foster homes. Prior to Harvey, the shelter had fewer than 75 pets at their facility and up to 12 in foster care.

“After Harvey, we took in about 68 animals in a period of about 2 1/2 weeks,” Special Pals Shelter Director Elizabeth Trick said. “Generally, we take in about 40 a month.”

As of early October, APA! has reunited about 20 families with their pets, Houston SPCA had organized more than 220 reunions, and Special Pals had reunited two pets with their families. All three organizations operate no-kill shelters, meaning they save at least 90 percent of the animals brought to them, Trick said.

“We have committed all along from the very beginning that after 30 days, we are going to focus our efforts to reunite all of the animals in our care to their owners,” said Julie Kuenstle, Houston SPCA director of communications.

The agencies worked with partners from across the U.S. to shelter pets and ensure that as many are returned to their homes as possible. The Houston SPCA reached out to the Atlanta Humane Society when Harvey struck.

“We had 120 very adoptable animals, and we arranged to move them to the Atlanta Humane Society,” Kuenstle said. “Every single one of those animals were adopted in one day.”

One key resource was the volunteers in the Katy community who came out to assist the rescue organizations, which are all certified nonprofits. Volunteers helped clean facilities, walk dogs and prepare animals for transportation outside of the region.

“The impact of this effort has been unbelievable, and it would have been impossible for us to rescue these thousands of animals without the support of the Katy community,” Heerwald said. “We were set up on the ground in the Katy Mills parking lot, and the hundreds of volunteers and donations that came to that location still render us speechless.”

The storm may be over, but the shelters still need volunteer assistance. APA! hired additional staff and rented out extra warehouse space in order to meet its post-Harvey needs.

“We need people we know we can count on,” Trick said. “We have a lot of volunteers, but then we have maybe about seven or eight that give us notice if they can’t come in.”

APA!, Houston SPCA and Special Pals Shelter are each foregoing fees for pet care provided as a result of Harvey. Their main concern is reuniting pets with families, all three directors said.

They also urged pet owners to have their animals microchipped and to register those devices in case the pets are separated again.