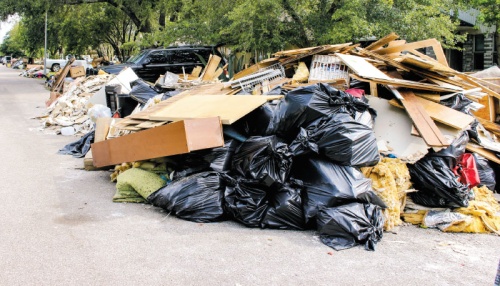 More than a month has passed since Hurricane Harvey slammed the Gulf Coast and its surrounding areas.

More than a month has passed since Hurricane Harvey slammed the Gulf Coast and its surrounding areas. Damage reports regarding the incident are far from completed, the cities of Pearland, Friendswood, and Brazoria County said. However, cities and counties have started gathering information on the effects of the storm.

According to a presentation given by Pearland Assistant City Manager Trent Epperson, over 1,000 homes and 30 businesses were flooded in Pearland. Damage to city property included six city vehicles and minor roof leaks at some city businesses. By early October, the city had picked up roughly 40,000 cubic yards of debris, with around 32,000 cubic yards left, Epperson said.

While 30 businesses took in water, even more were affected, said Carol Artz-Bucek, president and CEO of the Pearland Chamber of Commerce.

“The worst thing is that a lot of their employees were flooded as well. There’s just a lot of disruption,” Artz-Bucek said.

Even businesses that were not flooded were still out of commission during the storm due to flooded streets preventing both employees and customers from stopping by, Artz-Bucek said.

While many businesses have bounced back, Artz-Bucek predicts another two months of recovery for some businesses that were hit harder.
“Recovery efforts are long-term,” Artz-Bucek said.

According to Pearland Director of Communications Sparkle Anderson, these numbers are from estimates made as of Sept. 15. The city is still gathering information expects these numbers to increase, Anderson said.

The city had a meeting with the Federal Emergency Management Agency in the beginning of October and has 60 days to finalize project worksheets, Epperson said.

After receiving federal money, the city will offer buyouts for residents who have been flooded more than once, Epperson said. However, the process is slow, Epperson said.

As Community Impact Newspaper previously reported, over 3,000 homes were flooded in Friendswood, affecting more than 1,000 residents. Roughly 80 businesses in Friendswood suffered damage as well. Many of the businesses that were damaged were leased offices, Friendswood Chamber of Commerce President Carol Ives Marcantel said.

“A lot of landlords are helping them fix up their office,” Ives Marcantel said. “There are a few on [FM] 2351 and Melody Lane … and a lot of those were hit hard.”

The chamber’s office also suffered damage after taking in 20 inches of floodwater; it has temporarily moved to 807 S. Friendswood Drive, Friendswood. The chamber has hired a contractor and has begun rebuilding. The recovery process is going well for the chamber and other businesses, Ives Marcantel said.

“The cleanup is the biggest mess,” Ives Marcantel said, regarding the recovery process.

Since the storm, business activity in Friendswood has been able to resume as many businesses have relocated temporarily. Ives Marcantel believes many Friendswood businesses in the recovery process will be back in their permanent locations in December.

“One thing about a disaster like this … you’ll get to talking to people and that’s just a common conversation now,” Ives Marcantel said.
Brazoria County incurred an estimated $45 million in damage to county property, Brazoria County Judge Matt Sebesta said.

“It’s going to be long and slow,” Sebesta said, referring to the recovery process.

According to Trower, 38,499 residents in the county have registered with FEMA and approximately 30,000 have been referred to the Individual Housing Program–Hotel Voucher Program. So far, 15,000 residents have received housing assistance after the home was inspected and a total of $9.4 million has been administered for other needs assistance through FEMA.

The county is spending seven days a week picking up debris, Sebesta said.

“It’s going to take residents a long, long time to recover from this. For some, it may be years,” Sebesta said.
SHARE THIS STORY