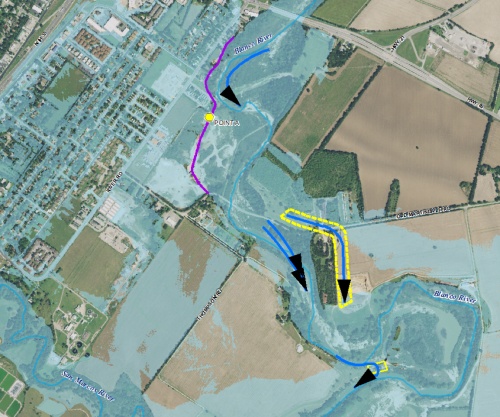 The project, which will cost a total of $11.5 million, will improve the banks of the Blanco River south of Hwy. 80 to Old Martindale Road and mitigate riverine flooding for the Blanco Gardens neighborhood. After the project is completed, the area will be able to withstand a 47-year flood, according to Laurie Moyer, director of engineering and capital improvement.

Moyer said $6.7 million of the new $8.7 million in U.S. Housing and Urban Development funds would be used for the Blanco Riverine project. The city is also receiving a $1.4 million loan from the Texas Water Development Board, and $900,000 of that is forgiven.

The rest of the difference will be covered by city funds, Moyer said.

The rest of the $8.7 million will be spent on administrative expenses and planning costs.

In early 2016, the city received $25 million from HUD and the City Council allocated the money to four drainage improvement projects after receiving a recommendation from consulting firm AECOM. The city has pledged to spend $7.5 million on housing; $12.5 million on infrastructure; $3.8 million on planning, which includes funding the feasibility study; and $1.3 million on administrative costs.

The $12.5 million infrastructure projects selected were:

Midtown/Aquarena Springs
This project would improve ditches from the intersection of I-35 and Aquarena Springs Drive south to Davis Lane. The intersection of Aquarena Springs and I-35 is especially prone to flooding, and because of the proximity of a nursing home, which must be evacuated during flood events, improving flood resiliency in the area is a high priority, city officials said. The project would benefit 82 structures, according to the consultant’s analysis. The improvements would accommodate a 25-year flood event (see sidebar).
Timeline: Design starts in 2017; construction would begin and end in 2018
Cost: $850,000 ($650,000 disaster recovery funds, $200,000 city funds)

Blanco Gardens
The project would construct a new storm sewer through the Blanco Gardens neighborhood near I-35 and River Road. The storm sewer would be built along part of Barbara and Conway drives. The project would benefit 420 structures, according to the consultant’s analysis. The storm sewer would be able to accommodate the 25-year flood. The Woods Apartments, located just south of Blanco Gardens, was shown to have increased flooding in some nearby homes, according to a 2016 engineering report. The apartment’s ownership has committed $500,000 to the city to assist in drainage projects in Blanco Gardens.
Timeline: Design starts 2018; construction would be set for 2019-21
Cost: $5 million ($4.45 million disaster recovery funds, $550,000 city funds)

Clarewood/Barbara Drive
The project would add a storm sewer on a portion of Bugg Lane and Clarewood Drive near the Blanco Gardens neighborhood and would include regrading Barbara Drive. The project would benefit 76 structures, according to AECOM’s analysis. The project would accommodate a 25-year flood event.
Timeline: Design would begin 2018; construction would be set for 2019-21
Cost: $2.5 million ($2.3 million disaster recovery funds, $200,000 city funds)

Uhland Road
The project would regrade the existing roadway on County and Uhland roads, just north of Aquarena Springs Drive. The project would benefit 166 structures and would accommodate a 25-year flood event.
Timeline: Design would begin 2017; construction would be set for 2019-21,
Cost: $4.2 million ($1.1 million disaster recovery funds, $3.1 million city funds)

During the meeting Monday, several residents said more outreach was needed to tell residents whether they qualified for a housing rehabilitation grant, which would use HUD funding to improve or rebuild homes affected by the May and October 2015 floods.

City staffers say they have held and continue to hold public workshops, have gone to residents' doors, have mailed information to residents, have published press releases and have made a YouTube video about the grant program.

"This process cannot go on forever," Mayor John Thomaides said. "We can only do so much outreach."
SHARE THIS STORY