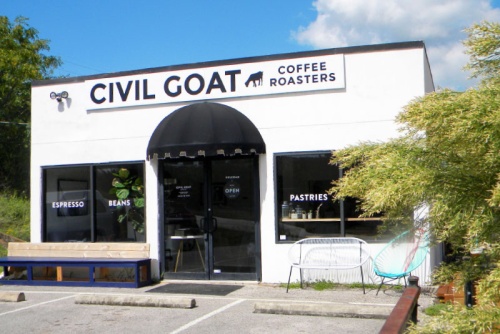 Those who visit Civil Goat Coffee Roasters on a Monday—the one day a week the business is closed—can expect to find owner Chris O’Brien with his 7-month-old goat, Butters, deep into renovating the space, bouncing between paint cans and booths.

Since opening at the beginning of the year, O’Brien is slowly making the coffee shop into his own imagining—a Marfa-esque escape along a quiet, winding road linking Bee Cave to Westlake. Although the coffee is enough to draw customers from the main parts of town, the design and the potential presence of Butters seal the deal, O’Brien said.

The name Civil Goat does not originate with the not-so-civilized pet; it comes from coffee’s origin story, O’Brien said. Legend has it that coffee only grew naturally at a high altitude and a goat herder noticed that when his animals ate the red beans, they acted differently.

So he tried it for himself, discovering the beverage that is now part of the daily routine of nearly two-thirds of Americans, according to a Gallup poll.

After years working for other people, O’Brien, a Houston native, decided he wanted to go into business for himself. “I was always trying to experiment at home with different grinders and brewers,” he said. “Then I read about roasting.”

Eventually he purchased a commercial-grade roaster on eBay. Near Bee Caves Road, O’Brien sells whole beans; fresh brewed coffee; espresso drinks with housemade syrups; and pastries from a nearby Bee Cave business. O’Brien said he hopes to add more food options and begin canning his cold brew in the future. He is also looking to expand to a second location.

“I keep it authentic to how I want to drink coffee,” he said.

Roasters such as Civil Goat are making a name for Austin. WalletHub recently released a list of the top coffee towns in America with Austin coming in at No. 18 -- the highest ranked Texas city.
SHARE THIS STORY