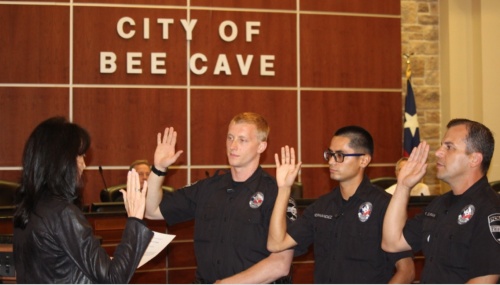 1. City Council on Tuesday approved the site and final plat plans for 30 acre-sized home sites located on Caudill Lane off Hamilton Pool Road. About half the site is in Bee Cave or its extraterritorial jurisdiction (ETJ), the remainder is in the City of Austin's ETJ.

The approval for the rural residential development called Creeks Edge came after the city’s planning and zoning commission this week recommended a number of exemptions for the project, including allowing the development to proceed with narrower streets than city rules allow and an absence of sidewalks. The precedent in this case goes back to an earlier site plan that allowed those changes in line with City of Austin allowances for privately-maintained roads, records show.

Since part of the property lies within the City of Austin’s ETJ and is also subject to Travis County reviews, the City of Bee Cave will not issue final permits for Creeks Edge until all levels of governing entities have made final decisions on the site plans.

2. Bee Cave City Council discussed forming its own committee made up of council members to look into the most effective way to distribute or spend the city’s Hotel Occupancy Tax balance, which as of the Oct. 1 start of the fiscal year, was at $680,000.

One idea was to direct funds to improving the parking lot and/or rest room facilities at the Old Bee Cave Schoolhouse. That project still has to go out to formal bids, the city manager told council.

It is possible an eventual citizens committee will oversee the task of distributing Bee Cave’s hotel occupancy tax funds, according to city leaders. But council members agreed as their own committee, they could "set the tone" for a future group of citizens to make sure policies and application processes were streamlined.

3. Bee Cave’s mayor swore in three new members of the city’s police department Tuesday evening. The three men, who range in age from 25 to 52, come from various backgrounds and experience levels but said they share a desire to make Bee Cave a better place to live.

Police Chief Gary Miller told Community Impact Newspaper the three vacancies had been open since last winter after two officers left to join the Hays County Sheriff’s Office and a third returned to a former law enforcement job in Bexar County. The three new hires began their shift work in September and bring the department up to a full compliment of 19 sworn staff, the chief said.
SHARE THIS STORY