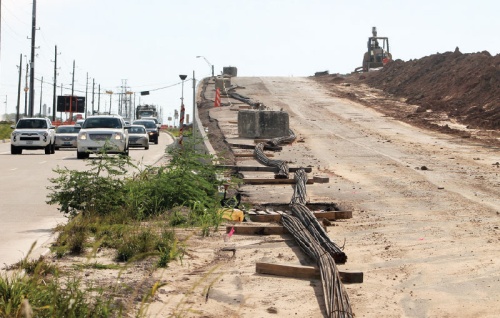 Read the latest updates on various road projects in and around Katy, including which projects were set back by Tropical Storm Harvey:

Morton Road expansion
The 1-mile section of Morton Road between Katy Hockley Cut Off and Katy Hockley roads has been widened from two to four lanes of concrete-paved road. Two-way traffic was open on the roadway as of August.
Timeline: December 2015-August 2017
Cost: $7.56 million
Funding sources: city of Katy, Metropolitan Transit Authority of Harris County

Cane Island Parkway project
Two lanes of concrete road will be constructed on Cane Island Parkway between Willow Fork and FM 1463, as well as a new concrete bridge and channel improvements. The 600-foot-long bridge is under construction and a storm sewer drainage pipe is being installed. The project completion date will likely be delayed at least two weeks due to Tropical Storm Harvey in late August; however, a new completion date has not been approved.
Timeline: July 2017-April 2018
Cost: $9 million
Funding sources: Fort Bend County, city of Katy, Ventana Development

Downtown Katy Plaza
The project to renovate streets and sidewalks around the future plaza next to Katy City Hall began Phase 2 work in late June. Flooding occurred around Second and Third streets during Tropical Storm Harvey but it is unknown whether that affected the project timeline.
Timeline: January-September 2017
Cost: $3 million
Funding sources: city of Katy

HCTRA began waiving the fees Aug. 27, when rains were still flooding roadways. Tolls resumed Sept. 14 on all of the system’s roadways except Beltway 8 between Hwy. 290 and Hwy. 59.

Tolls on the Grand Parkway were also waived between its two intersections with Hwy. 59 in Sugar Land and Kingwood, as well as the segment between I-10 and Fisher Road in Chambers County. TxDOT waived the tolls from Aug. 27 to Sept. 14.

For drivers using rental or new cars after tolls resumed, HCTRA recommended those with existing EZ TAG accounts to add their current vehicle license plate to avoid receiving a bill in the mail.

Temporary vehicles can be added online via the “EZ Plate” feature, which eliminates the need for the EZ TAG on the windshield on HCTRA roads only.

Drivers without existing EZ TAG accounts can use the EZ TAG Express app for iOS and Android devices to set up an account using their license plate for HCTRA roads only. More information is available at www.hctra.org