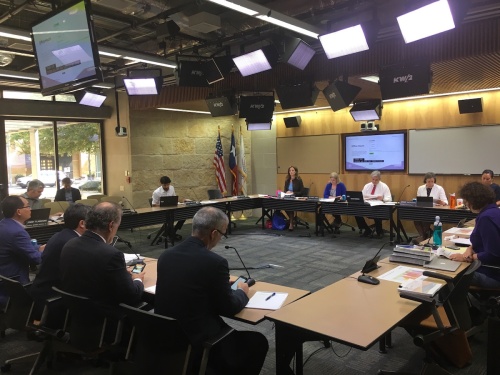 Austin City Council received a briefing on the second draft of CodeNEXT on Wednesday, the first since the draft was released on Sept. 15.

Austin City Council on Wednesday received its first briefing on the housing projections for the second draft of CodeNEXT—the rewrite of the city’s land development code.

The presentation, put together by CodeNEXT sub-consultant Fregonese & Associates informed council members of the city’s new housing capacity, its council district distribution and affordability. The presentation on Wednesday will be the first of several held for city council as the city’s land use commissions analyze the second draft of CodeNEXT.

Here are the 6 takeaways from the meeting:

1. CodeNEXT Draft 2.0 increases the city’s housing capacity from 137,830 units to 160,687 units. A large portion of that increase, according to the consultants, results from the new draft’s allowance of residential units in zones that previously allowed only commercial uses. The capacity is calculated by assuming that each parcel of land is built out to its maximum entitlement.

2. Consultants forecast that 10,719 existing units would be subject to redevelopment under the second draft in order to reach the max 160,687 housing capacity. This is an increase from estimates of 10,483 units in the first draft and 7,038 in the existing zoning.

5. Fregonese estimates that 139,571 units will be within a quarter-mile of future and existing bus transit lines.

6. Staff is working to provide numbers on how many affordable units can be expected after the city overhauled its density-bonus programs and how many of those units would be located in each council district.
SHARE THIS STORY