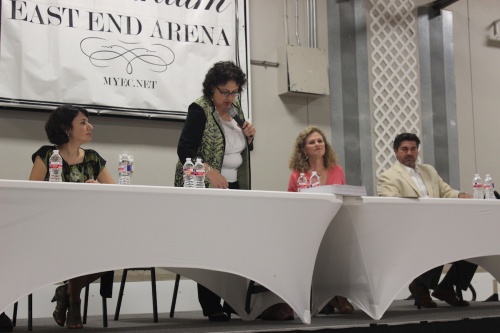 Four area Democratic representatives spent Thursday night discussing what they called a "very difficult" 85th legislative session and trying to forecast what could happen in a 30-day special session this July.

This was a foll0w-up forum for the four Austin-area representatives, who held a community meeting in January to discuss what to expect during the 85th session.

The most popular topics on their agenda during tonight's community forum—held at the Millenium Youth Entertainment Complex in East Austin—were local control and school finance, especially as they relate to the July 18 special session Gov. Greg Abbott has promised to call.

The problem, the legislators said, is that Abbott has yet to file a formal proclamation announcing the special session, which is preventing House and Senate members from filing bills.

The 19 items Abbott said he hopes to address include bathroom legislation that would regulate usage based on biological gender, property tax reform in Senate Bill 2, school finance reform through a commission to study the topic, school choice for special needs students, mail ballot fraud and local preemption that would scale back the power of local governments.

A large number of the 19 items focuses on the topic of limiting local government overreach, which Rodriguez said he had a problem with.


He pointed to a bill he authored that was an update to his 2005 bill and adjusted the number of housing units needed in a municipality to become a homestead preservation district based on the growing size of Austin's population. Abbott vetoed the bill June 15.

"It was really another attack on the city of Austin from the governor, and an attack on local control," Rodriguez said.

Howard and first-time House representative Gina Hinojosa of District 49, whose district runs through the heart of Austin, said the school finance reform issue was their top priority, and they were disappointed when House Bill 21 died in the Texas Senate Education Committee.

In its original form, HB 21 would put $1.5 billion into the state's funding for the majority of public schools and simplify the process for allocating money to school districts across the state.

Hinojosa said Austin ISD would have gotten about $10 million of that $1.5 billion share, but the Senate—through dozens of amendments—reduced the funding to $530 million and added what she called a "poison pill": a "private school choice" program that would subsidize private school tuition and homeschooling for special needs students.

Looking ahead to the special session, the legislators said they were not sure how all 19 items on Abbott's list were going to be addressed.

The special session is set to begin July 18.