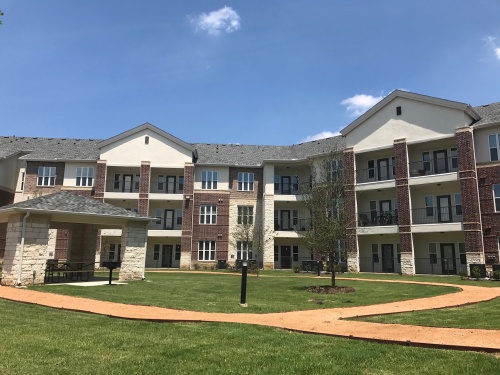 In conjunction with the McKinney Housing Authority, Newsome Homes celebrated its grand opening today in McKinney.

The seniors only community for people ages 55 and older has 180 one- and two-bedroom units that are rent-controlled, according to a press release from the McKinney Housing Authority.

"One-hundred percent of the units are tax credit eligible, which means they all have rents that are capped at the tax credit limits which are below the market rate rents," Roslyn Miller, executive director of the McKinney Housing Authority, said in an email.

The Newsome Homes Community was originally built in 1966 as one of McKinney’s four public housing sites and had not received any major renovations since being built.

Before the reconstruction, Newsome Homes had 64 units, Miller said in an email.

The McKinney Housing Authority worked with Carleton Residential Properties to demolish and rebuild Newsome Homes as a $21.6 million senior housing community. This was part of the U.S. Department of Housing and Urban Development’s Rental Assistance Demonstration program, which allows private capital to fund affordable housing developments.

“Newsome Homes was beyond the scope of what we could reasonably repair and upgrade,” Jeremiah Hammer, vice-chairman of the McKinney Housing Authority, previously told Community Impact Newspaper. “The site has been plagued with issues for years, from deteriorating pipes and underground infrastructure to the lack of gutters and modern drainage. Above ground, the structures were completely out of date. They were built when clothes dryers weren’t widely affordable, but clotheslines were, so all of the units had clotheslines outside.”

Here are before and after photos of the community: