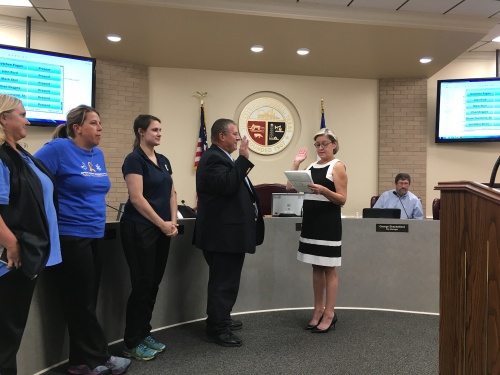 1. John Ford was sworn in as Position 1 representative on the Tomball City Council during the meeting and took his seat on the dias for the first time. A physical therapist at Tomball Regional Medical Center, Ford succeeds Field Hudgens, who was elected in 2011 but did not run for re-election this year.

2. Lori Klein Quinn was appointed mayor pro tem following her swearing-in for another term. In this position, Klein will preside over council meetings if Tomball Mayor Gretchen Fagan is unable to attend or has to recuse herself from an agenda item.

3. Tomball City Council approved on first reading an ordinance to annex 11 acres of land on Hufsmith-Kohrville Road, home of the existing Mustang Cat facility. A final approval to officially annex the land is expected to take place during the council's July 5 meeting.

4. The council awarded a contract to Third Coast Services in the amount of $106, 847.77 to install a temporary traffic signal light at the intersection of Hufsmith-Korhville and Spell roads. A Harris County Precinct 4 project to widen Husmith-Korhville will begin later this year, at which time the county will install a permanent signal light. Funding is provided by the Tomball Economic Development Corporation. The light is expected to alleviate traffic near the Tomball Business & Technology Park as well as prepare for a recently-approved subdivision, Alexander Estates.