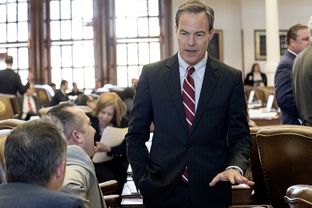 By Edgar Walters
After 15 and a half hours of debate on hundreds of amendments to the Texas House budget, lawmakers in the lower chamber passed the two-year, $218 billion document, with 131 votes in favor and 16 votes against.
The House vote included using $2.5 billion from the state’s savings account, colloquially known as the Rainy Day Fund. State Rep. John Zerwas, R-Richmond, thanked lawmakers for exhibiting “true leadership” with their willingness to tap the fund, “instead of electing to use an unconstitutional transfer from the transportation funding.”

That was a jab at the Senate, which last week approved its version of the two-year budget using a $2.5 billion accounting trick to free up funds dedicated to highway spending. The House must now work with the Senate, which is under the leadership of Lt. Gov. Dan Patrick, who vehemently opposes using the Rainy Day Fund, to reconcile their budget differences.

House lawmakers, debating the budget late into Thursday night, took several jabs at Patrick and other statewide elected officials throughout the evening.

Included in the fray were Gov. Greg Abbott, who saw one of his prized economic development programs defunded; Patrick, who heard a resounding "no" when his favored proposal to subsidize private school tuition with public funds was put to a vote; and Attorney General Ken Paxton, who lost more than $20 million from his agency’s budget for lawsuits.

On the winning side of the House budget debate were child welfare advocates, who saw funding for foster care and Child Protective Services tentatively boosted; social conservatives, who scored $20 million for the Alternatives to Abortion program; and the lieutenants of House Speaker Joe Straus' leadership team who, in a display of unity, easily brushed aside most challenges from far-right Republicans.

Statewide GOP leaders took some of the heftiest blows in the House chamber. Lawmakers there voted to strip $43 million from the governor’s Texas Enterprise Fund, the "deal-closing" fund the state uses to lure businesses from elsewhere, and divide it into two equal pots: one for Child Protective Services and foster care funding, the other for a program that pays for disabled children’s physical, occupational and speech therapy services. Both are hot-button issues that have dominated the House’s budget negotiations during this legislative session.

A spokesman for Abbott said he was unfazed by the vote. “As we get closer to a final budget, we believe the Legislature will ultimately fund critical economic development programs that create jobs and keep Texas in the vanguard of attracting new businesses in the future,” John Wittman, the spokesman, said in an email.

But Tea Party Republicans in the lower chamber took great umbrage at the proposal. State Rep. Jonathan Stickland, R-Bedford, gave an impassioned speech that prompted a large number of members to vacate the chamber as he accused House leadership of trying to hide a politically difficult vote on the Enterprise Fund. (The vote on the proposal, authored by state Rep. Sergio Muñoz, D-Palmview, was recorded without objection, and so without a record of who voted in favor or against it.)

Stickland called it “one of the most offensive things and disgusting things that I have ever seen in this body.”

Private school subsidies, a pet issue of Patrick and his Senate, also suffered a perhaps fatal wound on Thursday. House lawmakers voted 103-44 to prevent state money from being spent to subsidize private school tuition in the form of vouchers, education savings accounts or tuition scholarships. The proposal’s author, state Rep. Abel Herrero, D-Robstown, said it was “in support of our public schools and our neighborhood schools.”

Patrick did not respond to a request for comment on the vote, but state Sen. Larry Taylor, a Friendswood Republican and the Senate’s chief of public education, said he was disappointed by the vote.

Meanwhile, several other controversial topics ignited debate on the House floor, including multiple amendments that aimed to boost funding for the state’s Alternatives to Abortion program, which provides counseling and resources to pregnant, low-income women. As of Thursday evening, one proposal passed and the rest appeared to have been set aside in a back-door compromise. The one measure that was approved stripped $10 million per year budgeted for air quality control at the Texas Commission on Environmental Quality and moved it to the anti-abortion program.

State Reps. Mike Schofield, R-Katy, and Matt Krause, R-Fort Worth, spearheaded the effort, saying the environmental agency had been allotted funding in excess of what leaders there had actually requested. Anti-abortion groups such as Texas Right to Life took to Twitter to rejoice the amendment's passage, which received 92 to votes in favor to 50 against.

Other controversial issues were killed before they could even enter the fray. One proposal from Stickland, which would have cut state funding to public universities that allow non-citizens, including undocumented immigrants, to pay in-state tuition rates, never saw the light of day. That’s because state Rep. Rafael Anchia, D-Dallas, killed the amendment on a technicality, using a legislative procedure known as a point of order.

Tempers raged as the night dragged on. At one point in the mid-evening, state Rep. Briscoe Cain, R-Deer Park, attempted to offer an amendment that would have abolished the Texas Health and Human Services Commission’s advisory council on palliative, or end-of-life, care.

Cain introduced his amendment as an attempt to stop “death panels.” State Rep. John Zerwas, R-Richmond, an anesthesiologist and the budget’s author, quickly stepped up to the back microphone to lay into Cain for his choice of language.

Zerwas asked Cain whether he understood what palliative care was. After a tense exchange, the typically mild-mannered Zerwas uttered some of the sternest remarks of the night.

“If you want to go up and characterize something in such an offensive way, I would hope that you would have a little bit better understanding,” he said, as a large crowd of lawmakers gathered behind him in support.

Cain withdrew his amendment before House members could vote on it.

A few hours later, two conservative lawmakers confronted each other during a heated exchange and had to be physically separated.

Stickland had filed an amendment defund a state program for the abatement of feral hogs, which he’s become known for championing at the Legislature each session. Stickland railed predictably against the program, calling it “ridiculous” and a waste of money.

“It has not worked, and it never will work,” Stickland said, his voice rising.

That apparently offended rural lawmakers, notably state Rep. Drew Springer, R-Muenster. In response, Springer attached an amendment to Stickland's proposal that would cut the same amount of funding for the Texas Department of Transportation, but only for roads and highways in Stickland’s hometown of Bedford.

Stickland took to the back microphone to cry foul.

“Someone else has chosen to make a mockery of this system and play gotcha politics,” he said before being interrupted. Laughter had erupted in the gallery.

“It’s funny until it happens to you,” he continued.

Springer and Stickland then confronted each other on the middle of the House floor and had to be separated by colleagues. Springer’s amendment ultimately passed, 99 to 26, forcing Stickland to withdraw his own proposal to which it had been attached.