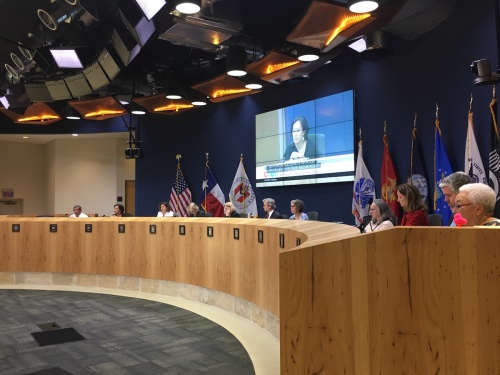 The department has been drafting the plan since early 2015. It proposes a 10-year strategy for Austin to make significant progress in its housing and affordability crisis. The full plan can be read here.

The 135,000 figure has been echoed over the last few months, but many questions have been raised over how the city reached that approximation. According to Erica Leak of the NHCD, the equation was as follows: Current housing units (397,637) multiplied by the estimated growth of the Austin-Round Rock Metropolitan Statistical Area by year 2025 (34 percent), which comes out to 135,197 units needed to accommodate growth.

Kitchen said the equation used to get to the 135,000 estimate is broken. She criticized the number for not considering the current 48,000 affordable housing unit gap or the hundreds of homeless people that need housing in the city.

“The goal has always been to point out what we need, not a number that we think we can get to,” Kitchen said.

Leak said that if those factors were taken into consideration, it would likely be another 88,000 units needed by 2025. Casar suggested the city come up with separate goals for housing: an extreme, “mission accomplished” estimate, a more moderate “aspirational” estimate and a conservative “just keeping our head above water” estimate.

The Imagine Austin Corridors will bear the density

The plan prescribes that at least 75 percent of the new housing should be within one-half mile of the Imagine Austin Centers and Corridors. This is the focus of the “Austin Bargain” that Mayor Steve Adler has been championing since his State of the City Address earlier this year, which pushes to manage the city's inevitable growth in a way that protects neighborhoods and places density along the city’s corridors.

The city should strive to offer 10 percent of rental units in each council district at or below 30 percent of the median family income and 25 percent of ownership housing units offered at or below 120% of MFI, according to the plan.

“It may not sound aggressive but it is quite aggressive,” said Leak. “It would be an incredible increase.”