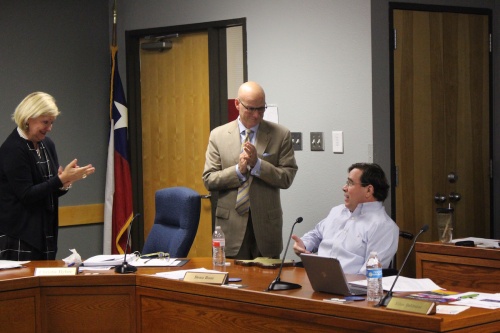 Beau Ross, who served on the Eanes ISD Board of Trustees from May 2011 until he resigned in September, passed away March 10 from Glioblastoma, a type of brain cancer.

Superintendent Tom Leonard said a service to celebrate Ross’ impact on the community will be held Tuesday at 3 p.m. at the Episcopal Church of the Good Shepherd, 3201 Windsor Road, Austin. Beau Ross served on the Eanes ISD Board of Trustees for five years.[/caption]

“Beau served the district and its students five years as a trustee and his passion and steadfastness for solid financials were impressive,” he said in an email today. “Beau was a true Renaissance man who understood the nuts and bolts of financials but also understood the value of allowing kids to explore their passions and appreciated giving teachers the freedom to express their art. He was a unique individual whose passions encompassed many facets of the school district.”

Board president Colleen Jones said Ross led by example, mentored others and looked for opportunities to bring consensus between the Board and the community during his time on the board.

“Beau was a true servant and a leader,” she said in an email today. “Even though illness forced him to leave the Board last fall, he and [his wife] Kathryn continued to contribute to Eanes ISD. We will dearly miss Beau's insight and inquisitiveness.”

After leaving the board, the Ross family established the Kathryn and Beau Ross Excellence in Education Fund, which was awarded to the Westlake High School Technical Entertainment Crew on Jan. 24.

“We will miss Beau’s smile and his tenacity,” Leonard said in the email. “On behalf of the entire Eanes ISD community, we send our love to Kathryn, [his sons] Boland and Winston and all whose lives were touched by this incredible man.”
SHARE THIS STORY