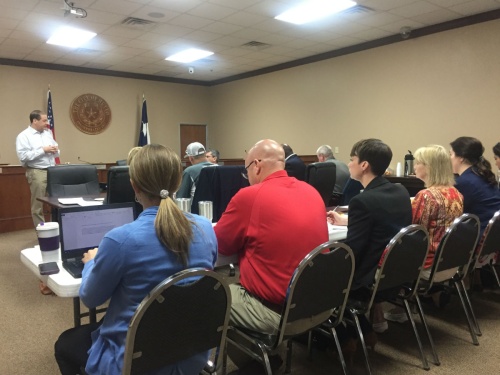 Many short- and long-term goals were the focus of a special Hutto City Council work session Saturday morning.

Jason Gray of JD Gray Group LLC presented highlights and discussed the 35-page proposed document that includes a list of goals with finish dates—all within the next five years.

One goal Gray discussed was having “an open-for-business structure throughout the city organization. That doesn’t mean you are open 8 to 5. It means you’re a facilitator of business, not a regulator.”

The strategic plan, according to City Manager Odis Jones during recent City Council meetings, is needed to allow the city to focus, prioritize and accomplish projects to aid in the city’s growth.

Hutto, with approximately 25,000 residents, may soon have a council-approved three- to five-year strategic plan. Jones said the document will provide deadlines and increase accountability.

“The way you hold staff accountable is by holding me accountable,” Jones said to council members. “You’ll get monthly updates. You’ll know if something unforeseen shows up.”

Jones, who started with the city in December, quickly spoke against rushing a bond proposal on to the May 6 ballot.

The bond committee proposal of $53 million was put on hold by City Council and Jones, who said the strategic plan was necessary before asking taxpayers for more money.

Some council members and Jones said a proposal may come in the future. In the draft of the strategic plan, the pursuit of a bond election is listed as a goal for the Nov. 7 election.

City Council members will review, discuss and update the document, which Jones said he expects to be ready for a vote in May.
SHARE THIS STORY