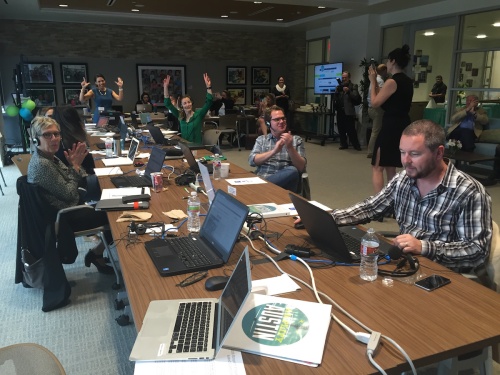 Local nonprofit I Live Here I Give Here is responsible for Amplify Austin each year.

Amplify Austin's 2017 fundraising goal was met Friday, with more than $9.8 million riased over the past 24 hours for area nonprofits.

More than 64,500 individual donations were made to roughly 700 nonprofits serving seven Central Texas counties. Boys & Girls Club of The Austin Area topped all donors, raising nearly $450,000 since 6 p.m. Thursday. The entire leaderboard can be found at the Amplify Austin website.

“Once again, Central Texans came together for Amplify Austin Day to support causes that are near and dear to their hearts, and they found some new ones as well,” said Celeste Flores, executive director of I Live Here, I Give Here, in a statement. “In this fifth year of Amplify, total donations increased by 5 percent, and more Central Texans participated in the giving than ever before. We want to challenge the community to keep the giving going throughout the rest of 2017. It is critical that we come together, not for just one day of the year, but everyday to support area nonprofits who provide vital services to the community. ”

With less than six hours to go, Amplify Austin is approaching $6 million in donations.

By 6 a.m. today, more than $4 million had been donated to Amplify Austin.

With 12 hours left before the fundraising marathon's 2017 end time of 6 p.m., about 660 nonprofits received a donation, with Hospice Austin still in the lead, on track to reach its $225,000 goal early in the game.

Any Baby Can, a nonprofit organization that helps children with illnesses and offers parenting skills, received the most amount of donations after Hospice Austin, reporting $171,000 around 6 a.m.

Nearly $1.5 million has been raised in the first six hours of Amplify Austin, a 24-hour megamarathon that benefits more than 700 Austin-area nonprofits.

Hospice Austin has raised approximately $122,000, or more than twice as much as the next organization. Austin Pets Alive has received nearly 400 donations, tops among all nonprofits.

The annual day of giving wraps up at 6 p.m. tomorrow. Nearly 600 nonprofit organizations have already received donations varying from $10 to $20,000, with St. David's Foundation committing to giving $1 million during the 24-hour donation marathon.

As of around 9 p.m. today, Hospice Austin was still in the lead for most donations raised at nearly $120,000.

We broke $100,000 in #amplifyatx! We are almost halfway to our goal. Thank you for your support! To donate: https://t.co/4oLetPAMgV

Under 3 hours, and #amplifyatx has nearly hit ONE MILLION DOLLARS! So many good causes out there—donate to ours! https://t.co/rRKpDCC2o5

In the first hour of the 2017 megamarathon, Hospice Austin topped the Amplify Austin's leaderboard, reporting close to $100,000 by 7:20 p.m. The nonprofit organization, which provides compassionate end-of-life care, has a goal of $225,000 donations.

We just found out we had the most donations from 6-7pm during #amplifyatx! Thank you @TicketCity for sponsoring our bass booster prize!

Amplify Austin is officially underway, with donations already pouring in for the more than 700 nonprofit organizations participating.

Watch parties across the city are forming as the 24-hour fundraiser continues throughout the night. Many nonprofits are reporting scheduled donations.

We’re 1 hour in to #amplifyatx! Help us continue to offer free HS training in ATX by donating https://t.co/LloRVHxCKv Mandy Brooks, managing director of Mainspring Schools, said the organization has already received $3,500 of scheduled donations. The organization's goal is $25,000 in donations.

The time has come! If you live here, give here! Together we can #AmplifyATX. You have 24 hours. Please help us reach our goal of purchasing a new bus! #WeAreBlood


After school today I told my 11 y.o. Sid about filmmakers who can't attend festivals they get into after working so hard on their films, and she was shocked and looked so sad. I told her how we raise money to change this with AFS and she said, "I'll give twenty bucks!" It was the sweetest! Here she is giving it! Can you give $20 too??? Please donate now! Only 24 hours to hit my goal for #amplifyatx!! . Donation link in profile til 6pm Friday 3/3! My goal is $2K and I'll match the first $500! . #amplifyatx #amplify2017 #amplifyaustin #amplifyatx2017 #amplifyaustin2017 #ilivehereigivehere #austinfilm #afs #austinfilmsociety @austinfilm #INDIEs


Day 209...today I was able to pay it forward with @amplifyatx to help out my foster mom @rinfox and @bastropanimalrescue Thank you for everything you did for me and past rescues!?#tbt #rescuedog #pitbull #adoptdontshop #payitforward #amplifyatx

St. David's Foundation, which reinvests proceeds from St. David's HealthCare to create programs and collaborations with nonprofit organizations, will be giving its $1 million to more than 60 nonprofit grant partners that participate in Amplify Austin, now in its fifth year.

More than 700 nonprofits are participating in the annual event, scheduled to start at 6 p.m. today and run for 24 hours.

I Live Here I Give Here, which celebrates its 10th anniversary this year, organizes the citywide day of giving. Donations can be made here.

The St. David's Foundation donation will bring Amplify Austin one step closer to this year's $9 million goal, which was not quite reached last year.

Community Impact Newspaper will update this story regularly with the total amount raised during Amplify Austin.