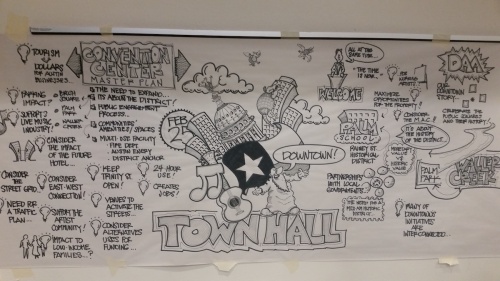 A proposal for the expansion of the downtown Austin Convention Center is expected to be voted upon by Austin City Council later this year.[/caption]

How do we turn the Austin Convention Center into a district that can best serve both the tourists that visit the top livable city in the U.S. and the Austinites who already live here?

That was the question posed Saturday morning during a town hall meeting attended by local stakeholders, downtown Austin residents and tourism industry professionals.

Austin Mayor Pro Tem Kathie Tovo, who organized the meeting, asked attendees to look at the convention center district “really holistically”, factoring in surrounding entities that would be affected by a possible expansion, including The Travis County-owned Palm School, the city-run Palm Park, Waller Creek, the MetroRail station, the Historic Rainey Street District and The Red River Cultural District.

The heart of the meeting revolved around what a convention center expansion would look like.

“Obviously a lot has changed in the [convention center] industry since this facility was built” in 1992, said Carla Steffen, deputy director and CFO of the Austin Convention Center. While no designs have been drawn for the expansion, she said it was time to start comparing other convention centers “to spark the creativity and start thinking of ideas.”

Steffen said the convention center staff will continue to solicit public feedback as it waits for Austin City Council to make a decision on whether to approve the expansion and how to fund it. She expects that approval to come later this year.


“Obviously a lot has changed in the [convention center] industry since this facility was built.” —Carla Steffen, Austin Convention Center deputy director and CFO

Others asked how the expansion would benefit the people who live here, including low-income families and families of color.

Michael Girard, owner of the downtown bar and music venue Speakeasy, said an expansion would continue to bring his business success, especially from the weekday convention crowd.

Stakeholders representing the nearby Palm School, whose history goes back to its days as an armory on what is now Cesar Chavez Street in 1839, also spoke during the meeting.

The school, which currently houses the county’s Health and Human Services and Veterans Services departments, no longer serves a programmatic use for Travis County, according to Travis County Judge Sarah Eckhardt.

She said Travis County commissioners are looking at what should be done with it given its financial and historical value.

Meanwhile, Waller Creek Conservancy—tasked with transforming 37 acres of the creek that runs from Lady Bird Lake to the University of Texas—is soliciting feedback on the adjacent Palm Park. The conservancy is proposing transforming the park into a nature-filled playing area that incorporates the historic school within its trails and green space.

Several attendees spoke about the importance of preserving Palm School as a Mexican-American museum—the elementary school, once it returned to the hands of Austin ISD, was attended by many Mexican-American children, as well as Swedes and Anglo-Sextons, according to Travis County Commissioner Margaret Gomez.

The school is currently undergoing a historical survey to determine how much of the architecture is worth preserving, Eckhardt said.

Steffen said the convention center is waiting on what will come from digging into Austin Mayor Steve Adler's "downtown puzzle" resolution, which called for an examination into how the issues of transportation, the convention center, homelessness, community benefits, the Dell Medical School innovation zone and Waller Creek could "fit together" and determine the future of the downtown core.

The convention center is also waiting on the Visitor Impact Task Force, a group of tourism industry stakeholders appointed to look at how the city's hotel occupancy taxes are used. The task force was originally slated to present recommendations to City Council in April but voted in its Feb. 14 meeting to extend that deadline to June.

Lastly, the city is looking at the possibility of expanding the boundaries of the Waller Creek Tax Increment Financing (TIF) district, originally created to finance the construction of flood control improvements along lower Waller Creek.
SHARE THIS STORY