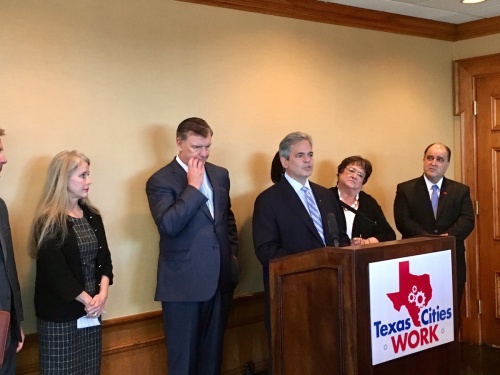 Mayor Steve Adler was joined by other Texas mayors at a press conference on Friday to discuss the cities' legislative priorities.

Mayors from three major Texas cities said the “Bathroom Bill” is taking up too much energy at the state Capitol where they insist the focus should be on education.

Mayors Steve Adler of Austin, Mike Rawlings of Dallas and Maher Maso from Frisco each made the claim at a press conference Friday afternoon in downtown Austin where they were joined by a group of Texas mayors from San Antonio, San Marcos, Manor, Lubbock, Houston and Galveston to discuss their legislative priorities.

Senate Bill 6 known as the “bathroom bill” would require people to use public bathrooms—at government buildings, public schools and public universities—based on their biological gender. The bill would supersede local-level anti-discrimination laws that allow transgender people to use the bathroom that corresponds with their gender identity.

The mayors expressed concern over the prospective negative economic impacts the bill would have across the state but urged state legislators to place more weight on education.

“[SB 6] is taking too much oxygen out of the room,” Adler said. “We are in desperate need of the state legislature to focus on education reform and finance reform. That is something that would touch everyone.”

Maso of Frisco expressed a similar sentiment. His city is one of the fastest-growing cities in the country, thus leading to the opening of more schools. He said that burden is placed too heavily on local taxpayers. According to Maso, property values in Frisco’s ISD grew over $3.7 billion last year, yet the majority of school funding is coming from taxpayers.


“We are in desperate need of the state legislature to focus on education reform and finance reform. That is something that would touch everyone.”

“The funding of education, in our opinion, is not heading in the right direction,” Maso said. “That creates two problems: an unfortunate excessive burden, and the level of education is suffering statewide.”

However, the potential economic impact of the bill's passage does concern the mayors. San Antonio is set to host the NCAA Men’s Basketball Final Four in 2018, something that Mayor Ivy Taylor said in the past has generated $100 million in economic activity. However, the event is at risk, she said. The NCAA and National Basketball Association pulled major events out of North Carolina following the passage of a similar bill last year.

Adler said culture is a big part of what attracts business and corporations to Austin, one of the nation’s leading tech hubs. However, that culture, as well as the city's attractive business community, may be at risk should the state impose its restrictions, he said.

“Companies are attracted here because they want to live in Austin because of the culture we have that is manifest,” Adler said. “If we cease to become who we are, then the folks looking for that kind of a community will find a different community to go to.”

Rawlings of Dallas expressed hope that state leaders “will do the right thing” when it comes to SB 6, but he also pushed the focus back on education.

“The bathroom bill is not a big issue except for tourism, and we’ve got to deal with that,” Rawlings said. “The big issue is the future of the state. What are we going to do with all those kids that are going in Mayor Maso’s schools and throughout the state of Texas? Are we building a great state for the next two decades? That is the question that should be being debated in the Capitol.”
SHARE THIS STORY