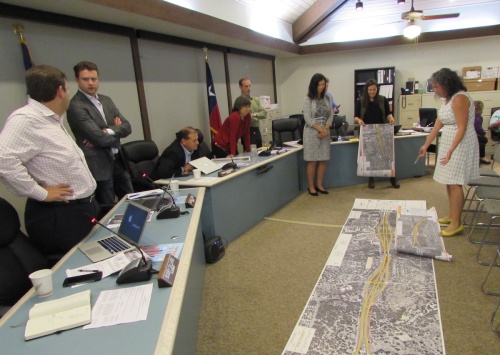 The council passed a resolution at the session to craft a letter to the Texas Department of Transportation, Central Texas Regional Mobility Authority and Central Area Metropolitan Planning Organization that reinforces the city’s positions on the project and requests further study and explanation.

Amy Pattillo, city liaison to the project, said the plan appears to be moving toward a “double decker” design or a “wishbone” design. Both designs utilize elevated lanes, which the city of Rollingwood opposes, from Barton Skyway to Cesar Chavez Street as part of a direct-connect lane from Slaughter Lane to downtown.

The city opposes elevated lanes because they will use right of way at the Bee Caves Road and MoPac intersection, removing the opportunity to redesign the intersection in the future, city liaison Wendi Hundley said.

Rollingwood’s preferred alternative is a configuration that would add two non-elevated express lanes to MoPac without an elevated direct-connect lane, she said.

Former Mayor Thom Farrell sent the most recent letter November 2015, and Mayor Roxanne McKee said she wanted to reaffirm the city’s positions with updated information and the feedback of the new council.

The city will request a traffic study be conducted at the intersection of Bee Caves Road and South MoPac.

Pattillo said the city has requested a traffic study numerous times, but were told the intersection was not in the scope of the project.

“Changes on MoPac will indirectly impact [Bee Caves Road],”  attorney David Smith said. “I think more cars travel through that intersection a day than travel from Cesar Chavez [Street] onto MoPac. If there is an adverse impact for traffic, TXDOT and CTRMA have to take that into account in their planning and analyze it.”

Smith worked with the city previously to craft previous letters regarding the project.

Rollingwood will request that engineers fully optimize the plan without elevated lanes to fairly compare plans.

Pattillo said optimized exit ramps at Cesar Chavez Street were included in the “double decker” and “wishbone” plans, but not to the plan without elevated lanes.

“We can ask [TxDOT and CTRMA] to look at the elements engineers have added to other plans that they say will help allow traffic to move more freely and to include them on the city’s preferred plan,” Hundley said.

With MoPac’s close proximity to Zilker Park, Rollingwood would like design proposals to include the analysis of event traffic, another request Pattillo said the city made in the past.

“On weekends, whether or not there’s a festival at Zilker Park, traffic is jammed down there near the bike trails,” Dillard said. “Right now [TXDoT and CTRMA] are only really taking into consideration the impact on weekday traffic.”

Pattillo said when TxDOT created plans for an I-35 redesign, they took into account traffic flow from Darrell K. Royal Texas Memorial Stadium.

“There is not be a stadium [on Mopac] but Zilker Park gets used in a stadium format at least 30 days a year,” she said. “A huge number of people are there all the time, so why aren’t TXDOT and CTRMA required to look at special event traffic flow?”

Rollingwood supports a project that adversely impacts to the aesthetic of Zilker Park and its surrounding neighborhoods the least, McKee said.

“There are a million people a year [who] visit Barton Springs,” Hundley said. “A huge part of the downtown economy benefits from what happens at Zilker Park throughout the year.”

McKee said noise pollution, light pollution and blocking the view of the Austin skyline were worries for Rollingwood residents.

Smith said the city has raised concerns about the lack of a pedestrian bridge over Lady Bird Lake in the plans that have been presented.

“The pedestrian connect that runs right by the botanical gardens is gone in the drawings,” he said.

The city is requesting that the bridge be added to the project.

“The South MoPac project is really [aimed] to get traffic from Slaughter Lane into downtown, which we need,” Dillard said. “But do we need it at the expense of destroying the aesthetic of one of the things that makes Austin great?”