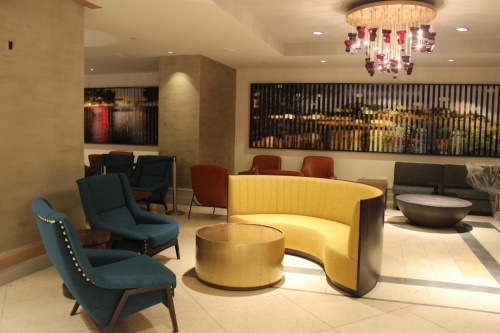 The Hilton Austin completed renovations on its downtown hotel over the weekend.

The Hilton Austin has stripped away its orange walls and replaced them with a clean, cream look.

On Friday, the hotel's staff was putting the final touches on the year-and-a-half-long renovations, which cost the company around $23 million.

The renovations—which began in May—come just in time for the Planning Convention Management Association, or PCMA, being held this week in Austin.

The PCMA, which brings about 4,000 people to Austin from Saturday to Thursday, is a chance for the city of Austin, the Austin Convention and Visitors Bureau and the city's hotels and venue spaces to show off in the hopes that convention managers bring their business to Austin in the future.

On Friday, as PCMA attendees began arriving, concierge staff was busy checking out the new digs at the renovated concierge desk, and large communal tables and sitting areas were being arranged around the lobby.

Hilton Director of Marketing Allen Alderman said most of the Hilton Austin's business comes from such conventions, so the pressure was on as the window decals for the lobby's new Starbucks were in danger of peeling off during last week's cold front.

The hotel's latest food concept, the Austin Taco Project, is a little behind schedule but should be open in February, Alderman said. Featuring 26 craft beers on tap and three housemade cocktails, the restaurant is also accessible through a Fourth Street entrance.

"[Austin Taco Project is] in pursuit of the world's most perfect taco," he explained.

Across from the Austin Taco Project stands The Reverbery, a new banquet hall concept that replaced steak and seafood restaurant Finn & Porter. Alderman said there haven't been any events scheduled yet, but he expects the Reverbery to be used often for live music concerts.

Alderman said the next space to tackle is the spa and pool area, which he expects will get a fresh look in the second quarter of 2017 after the South by Southwest Conferences & Festival.

The hotel is also working to connect the Austin Convention Center to the Hilton's sixth floor ballroom through an enclosed corridor. Alderman said he expects that to be completed in late summer or early fall.