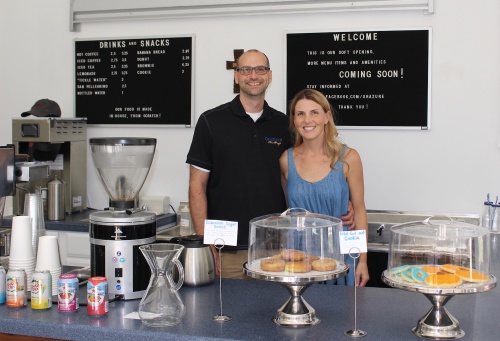 "In everything we do, we're trying to do a little more interesting and do everything by hand," Michael said.

Michael began dabbling in hand-roasted coffee four years ago and said the Magnolia location allows him to educate customers on specialty coffee. He said he purchases his coffee beans from high altitude, small farms, which yield beans with the most flavor.

"We wanted a place where we could showcase our coffees and how we roast and help educate people to what we're bringing to the market, which is specialty coffee," he said. "[This location is] a place for us to experiment on different brew methods and different products and really to experiment with the public and teach them and get feedback from them on what they like."

Michael said the name Orazure, which means "blue hour" relates to the time of day—either early in the morning or after dinner—at which people often drink coffee. The blue hour is the few minutes just before sunrise and late in the evening that the sky has a strong blue hue, he said.

The business had a soft opening in early October and is open some Saturdays for the Tamina Farmer’s Market. www.orazure.com
SHARE THIS STORY