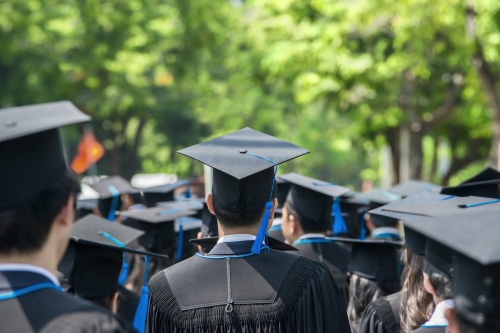 From 2011 to 2015, tuition and fees increased at a rapid rate at several four-year universities.

Rising tuition costs are changing the landscape of postsecondary education in the Greater Houston area. An increasing number of students are seeking more affordable options, including community college and dual-credit programs focused on majors marketable to the region’s dominant industries.

From 2011 to 2015, tuition increased at a rapid rate at several four-year universities, including a 22 percent increase per semester at the University of Houston and a 42 percent rise at Sam Houston State University. The college tuition spike seen statewide also led Texas Lt. Gov. Dan Patrick to declare limiting tuition growth a priority for Texas Senate education committees in the 2017 legislative session.

“Next session, the Senate will look closely at a number of cost reforms, including performance-based funding, which brings increased accountability and affordability back by requiring education institutions to meet high-performance targets before increasing tuition above inflation,” Patrick said at a press conference in April.

While tuition costs have increased by hundreds of dollars per semester at many four-year universities statewide in the past five years, the cost of a 12-credit semester at the Lone Star College System has risen only
10 percent from $704 to $776.

LSCS, the two-year community college system serving the northern Greater Houston area, is the first stop for many high school graduates. Denise Cipolla, Conroe ISD coordinator of guidance and counseling,  said LSCS is the No. 1 option for the district’s students.

“Many of our students will spend one to two years there either based on a financial decision or just looking to stay home comfortably for another year and then transfer those credits to a four-year university where they want to graduate,” Cipolla said.

Amos McDonald, vice chancellor of government and public relations at LSCS, said enrollment systemwide has increased from about 46,000 in 2005 to more than 82,000 at the end of the 2016 spring semester.

Although part of that growth can be attributed to an overall population boom—Montgomery County has seen an increase of more than 80,000 residents just since 2010—McDonald said the economy is also a factor.

“Debt is a critical reason why a lot of students start with us, but you have a ton of students who are transferring from us to four-year colleges,” McDonald said.

This strategy allows students to reduce their overall cost for a four-year college education, McDonald said. Two years at a LSCS campus would cost about $3,000 in tuition, while four years at a public university in Texas would average about $33,000, McDonald said.

LSC-University Center in The Woodlands also offers bachelor’s degree programs through four-year universities, such as Sam Houston State University, University of Houston and Our Lady of the Lake University. The center added Stephen F. Austin and Lamar universities in May.

“We’re getting some universities that have some pretty high name recognition,” said Becky Duncan-Ramirez, executive director at LSC-University Center. “I think that’s exciting for students to be able to hang on their wall—that [they] got a degree from Sam [Houston] or SFA, but [they] didn’t even leave home.”

Each university represented at the University Center has its own scholarship opportunities for students, Duncan-Ramirez said. Some universities offer scholarships specifically for students transferring from LSCS.

The University Center started a new, more transparent financial aid process in February that explains each student’s scholarship opportunities and benefits associated with the university of their choice, Duncan-Ramirez said.

“We try to address some of those financial issues up front so that we can tell students,” Duncan-Ramirez said. “As far as the actual process for financial aid, they have to go through that university’s student services.”

Enrollment at community colleges tends to be countercyclical—it grows as the economy worsens and falls as the economy improves, said Matthew Fuller, assistant professor of educational leadership and counseling at Sam Houston State University.

He said the cycle is a boon for community colleges because they are less expensive and lead to credentials more quickly than four-year universities.

As tuition and enrollment have grown, so have the programs offered at higher education institutions to meet workforce demand in and around Montgomery County. Health care, the oil and gas industry and information technology—all science, technology, engineering and math, or STEM, fields—are key areas for post- college employment, McDonald said.

According to an AACC report, the number of students graduating from community colleges with degrees in science and engineering has increased nationwide by 120 percent from 2000-12.

With the opening of Houston Methodist The Woodlands Hospital and Texas Children’s Hospital The Woodlands in 2017, LSC-Montgomery president Rebecca Riley said the health care sector is experiencing the most immediate workforce need.

Riley said LSC-Montgomery has already expanded its health care programs, including the addition of a paramedic program this year. The college also plans to expand existing programs, she said, and is seeking funding options to grow its radiology technician program in the near future.

Riley said another workforce need is training qualified STEM secondary education instructors for employment at local school districts. LSC-Montgomery has applied for a Texas Affordable Baccalaureate expansion grant, which—if accepted—would make it possible for high school students to enroll in dual-credit courses through the college in the education field.

While stakeholders are still assessing employment needs to develop a long-term plan, Riley said the group plans to develop additional programs—based on its findings—within a year to address workforce demand.

“I think by the end of another year or so, we will have some really concrete programing in place that will benefit the community,” Riley said. Dual-credit programs offer an opportunity for students to earn college credit before graduating from high school, preparing them for higher education while potentially cutting the costs they might face in the future. CISD, as well as private schools in The Woodlands area, offer dual-credit course options to students looking to get a head start on their college degree.

“Students can graduate with a various amount of college credits,” Perkins said. “If a student is a part of the Accelerated College, the student can have 60 hours or more. Students who take dual-credit or college credit-only courses throughout their high school career can have as few as three credits to a maximum of 48 college credits.”

During the 2015-16 school year, 3,200 CISD students were enrolled in dual-credit classes, an increase of more than 1,000 compared to the previous school year, Perkins said. Students at Sojourn Academy, a private Christian school in Oak Ridge North, have the opportunity to take dual-credit math, English and history courses through Colorado Christian University for $200 per class.

“We’ve had students tell us that college was easier than their education here with us,” Sojourn Academy Headmaster Jess Larson said. “To hear college educators affirming that by saying what [we’re] doing is definitely college-level ready is encouraging.”

“I am a huge proponent for dual credit,” Duncan-Ramirez said. “We see new students come in and that transition of how a college class works versus how their high school worked—they [get] experience with that. Hopefully when they start their freshman year [of college], those types of things are helping them transition into college life easier.”

Even if students choose to stay close to home after high school, the University Center gives them that option as well.

“Part of Lone Star is you can stay close to home and still get your degree,” Duncan-Ramirez said. “That’s what we’re trying to say, too. You can also get your bachelor’s degree and stay close to home. All of those pieces are some of the benefits you get by taking dual-credit.”