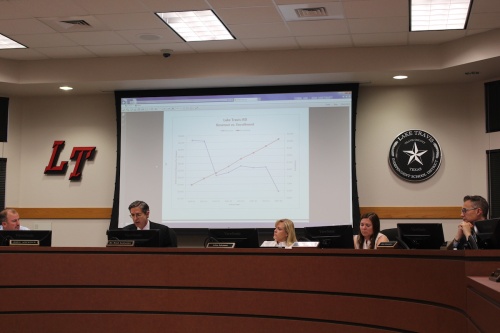 The Lake Travis ISD board of trustees discusses the possibility of a tax swap and bond election in 2017.

Lake Travis ISD Superintendent Brad Lancaster has asked the board of trustees to consider a bond election and tax swap in 2017.

He told the LTISD board of trustees May 17 the tax swap would involve transferring two cents from the district’s I&S, or interest and sinking tax rate—which pays for bonds and debt service—over to the M&O, or maintenance and operations tax rate, which finances the district’s general fund, or operating budget.

The transfer of the two cents—known as “golden pennies” because they are not subject to recapture under the M&O tax rate—would generate an additional $2 million annually that would help replenish the money the district started losing in 2011 when the state cut funding for all school districts, Johnny Hill, the district’s superintendent for business, financial and auxiliary services, said.

The cuts from state funding will end in 2017, but the district previously had to reduce its budget to offset the cuts, he said.

“I think there are very, very few cons [to the tax swap],” Lancaster said.  “We’re in a better position than we were several years ago to do this kind of thing.”

He said the possibility of not raising the tax rate and issuing a more-than-$200 million bond was worth celebrating.

“This is an astonishing situation,” Lancaster said. “I’ve never been in a district where we’ve had that discussion.”

The district will undergo a facilities assessment this summer to evaluate if sites and facilities need to be updated or added to.

The results of the assessment will help determine what the possible November 2017 bond election will fund, Lancaster said.

Hill said the next steps include gathering feedback from the trustees and having conversations with the community about the possible tax swap and bond election.

The board of trustees also heard from Holly Morris-Kuentz, the district’s assistant superintendent for human resources services, who proposed a 1.5 percent salary increase and no change in benefits for the district’s teaching staff.

The board will likely vote on the possible salary and benefits adjustments at its June 7 workshop.

Correction: This story has been updated to reflect that Superintendent Brad Lancaster said tax rates, not taxes, would likely not increase.
SHARE THIS STORY