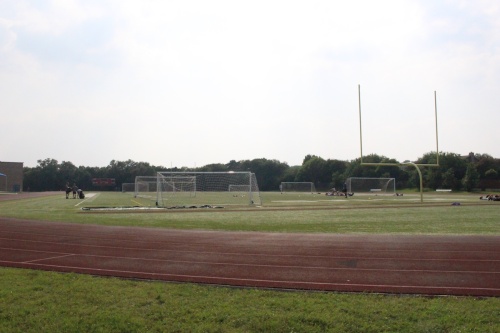 The Eanes ISD board of trustees approved the purchase and installation of two field lights for the Hill Country Middle School practice field.

The Eanes ISD board of trustees approved May 10 spending a $2 million donation on field lights for the practice field at Hill Country Middle School and for field lights and artificial turf at Westlake High School’s field No. 3.

The donation, made by Tires Made Easy, was given last September to be used to fund upgrades or improvements to district athletic fields, according to background information provided in the meeting agenda packet.

A committee was formed when the donation was received to make recommendations on how both the district and the community could most benefit from this.

Citizens at the board’s May 10 meeting spoke in favor and in opposition of the field lights at HCMS. Woodhaven residents living behind the HCMS field said they were worried about the lights shining into their homes at night and the amount of noise the lights would attract at night.

Background information included in the board’s agenda packet shows the LED lights use the most up-to-date technology and will be installed on the north side, directed away from neighboring residents.

Woodhaven resident Mark Timmons gave the board of trustees a list of requests he said the neighbors would like the board to address. Included in his list--which he said covered other problems neighbors were facing with participants using the field--was placing the light poles facing away from their homes, ceasing Sunday operations, turning off the lights at 7 p.m. instead of 9 p.m. and installing a permanent bathroom to deter people from relieving themselves in the woods near homes.

Several committee members spoke in favor of the lights, explaining the donation was meant to help grow athletics in the district and expand the hours of use on fields.

“I was expecting everything I heard,” Timmons said after the meeting.

He said he liked the idea of creating a subcommittee to address field issues throughout the district, something the board said it was open to in the future.