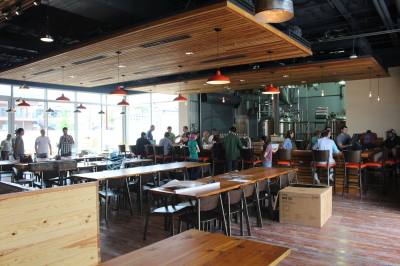 AquaBrew, 150 S. LBJ Drive, will open at 3 p.m. on March 18 and will serve a variety of beers, entrees, snacks and desserts.

The opening night entree menu will include a beef shoulder that has been braised in an India Pale Ale and served with potato puree, root vegetables, egg and beer au jus for $15; a brown sugar grilled salmon served with zucchini corn cake, garlic kale, dill yogurt and molasses mustard for 16; and assorted seasonal vegetables for $12.

The menu also features wine by the glass and by the bottle, in addition to non-alcoholic beverages such as organic Maine Root soda, iced tea, coffee and more.

Russo said he was excited to open the doors to the restaurant, after years of preparation.

“It feels very similar to when you graduate from college,” Russo said. “You put in this long-term effort and you get a reward at the end in the form of a degree. Except this feels way more intense than that, because it’s about the community. It’s about a lot more than just, ‘Oh I got a business.’ It’s deeper than that.”
SHARE THIS STORY