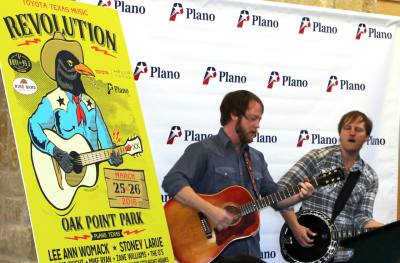 Toyota Motor North America announced at a press conference March 4 that it will be the title sponsor for this year's Texas Music Revolution music festival. The event will be hosted by KHYI 95.3 The Range March 25-26 at Oak Point Park and Nature Preserve Amphitheater.

Headliner and Dallas band The O's performed at the press conference to help promote the festival, which for the past 19 years has been held at nearby Southfork Ranch in Parker. Organizers said they chose to move the festival to Oak Point in order to accommodate for growth.

Other performers at this year's TMR include Lee Ann Womack, Stoney LaRue and 16 other artists on two stages.

The city of Plano will be including discount ticket offers in their March water bills. For more information about the Texas Music Revolution festival, visit www.khyi.com.
SHARE THIS STORY