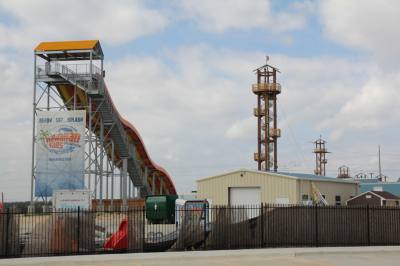 Hawaiian Falls has been open since summer 2014 in Pflugerville.

At a Nov. 12 meeting, the Pflugerville Community Development Corp. board agreed to accommodate the Hawaiian Falls parent companies on their lease deferment request.

While the PCDC plans to work with Hawaiian Falls to resolve missed payments, the deferment means the water park company is in default, which has performance agreement implications, Interim Executive Director Amy Madison said.

PCDC Board President Doug Weiss said he expects the two entities will come to a resolution quickly.

“I am recommending we instruct staff to work with [Hawaiian Falls] toward a resolution while we proceed with all contractually agreed upon provisions," he said. “I do expect we get that cured by the end of the year.”

Pflugerville City Manager Brandon Wade and city staff confirmed that Hawaiian Falls' parent companies had never submitted a late payment prior to October's missed payment. Wade noted that any lapse in payment from Hawaiian Falls would not affect city finances or residents because payments on the PCDC's $25 million loan for the water park project are taken directly from sales tax revenue and the remainder of those funds serve as the PCDC's operating budget.

When the Hawaiian Falls project was first discussed, city staff and officials realized there could be some challenges during the first years of operation, Wade said.

"A water park is a seasonal activity and it was discussed very thoroughly that there could be some potential for issues because of the seasonal nature of the park," Wade said. "Hawaiian Falls so far has put smiles on a few hundred thousand people's faces. It brings people to Pflugerville who otherwise wouldn't come to Pflugerville. I think it has a very bright future ahead of it and the city plans to work with Hawaiian Falls to make certain that bright future is there."

The PCDC backs the $25 million loan for the water park project, which is repaid through monthly lease installments of $132,026 by Source Capital and Horizon Family Holdings LLC, according to PCDC Interim Executive Director Amy Madison.

Madison said the PCDC board will meet Nov. 12 to discuss what action should be taken in response to the missed payment.

"Hawaiian Falls informed the PCDC that they would miss their lease payment due October 31 and requested deferral on payments until the end of the year to allow for internal refinancing on real estate transactions," Madison said. "Our board will meet to discuss this request on Thursday and will provide a formal response to the company at that time."

Madison said Hawaiian Falls and its parent companies had never missed a payment since she took over as interim executive director this summer.

Hawaiian Falls opened in 2014 after the PCDC incentivized the development by providing financing, Community Impact Newspaper reported in 2013.

In December the Pflugerville water park laid off 12 full-time employees as a result of a slow winter season, according to a spokesperson at the time, and in May, Atlanta-based private equity firm Source Capital LLC announced the acquisition of Horizon Family Holdings, stating the move would help the water parks expand and grow. According to Madison, after the acquisition and corporate restructuring, the Hawaiian Falls lease payment schedule changed from annual payments to monthly payments.

During the 30-year life span of the Hawaiian Falls performance agreement, the water park is expected to generate $6.1 million in sales tax revenue, Community Impact Newspaper reported in 2013.
SHARE THIS STORY