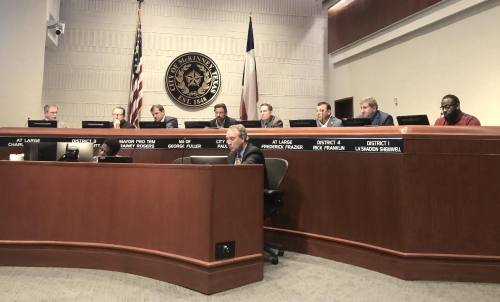 The city of McKinney adopted the fiscal year 2019-2020 budget and tax rate during a Sept. 17 McKinney City Council meeting.

The city of McKinney adopted its property tax rate and budget for fiscal year 2019-20 during a Sept. 17 meeting.

Following the approval of this tax rate, FY 2019-20 marks the fourth consecutive year the city's property tax rate has been decreased.

In addition, the city is expecting to bring in over $5 million more in property tax revenue this year compared to last year, said Mark Holloway, chief financial officer for the city of McKinney.

Below is an interactive chart showing the city's adopted tax rates over the last five years.

A portion of McKinney homeowners’ property taxes go toward the city's general fund budget. These budgets are adopted yearly to fund city operations and projects.

This budget will also fund over 35 new city positions among other things, according to Holloway.

Below is an interactive chart showing what funding has been allocated toward each city department for the following fiscal year.