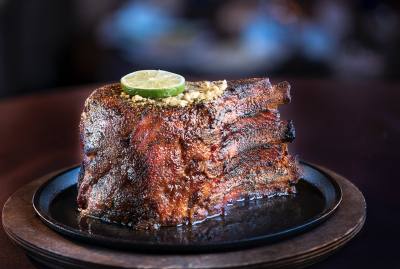 The Perry's Famous Pork Chop is a popular entree at Perry's Steakhouse & Grille.

Show map
The Perry's Steakhouse & Grille chain celebrates its 40th anniversary this week and will mark the occasion with a discounted menu offering nationwide.

The special, a 79-cent pork chop, will be available to select visitors at all Perry's locations, including The Woodlands restaurant at 6700 Woodlands Parkway. Perry's began operating in The Woodlands in March 2001.

Grant Hunter, corporate chef with Perry’s Steakhouse & Grille, announced the special in a video posted to the company’s Facebook page May 14.

“Perry’s is celebrating its 40th all year long with special promotions and offerings,” Hunter said in the video. “This Friday, May 17, [at] all Perry’s Steakhouse locations—in honor of the year we were founded in 1979—the first 100 people before 11 a.m. lined up outside will receive our lunch-cut Perry’s Famous Pork Chop with potatoes [and] applesauce for only 79 cents. We appreciate your loyalty for the last four decades, and we look forward to celebrating with you.”

Perry’s Famous Pork Chop typically costs $39.95 at dinner and $14.95 during lunch hours. Hunter added recipients of the special offering must be at least 21 years old.

In addition to pork chops, the restaurant serves a variety of steaks, seafood dishes, soups and salads. The restaurant also features Bar 79, which offers bar bites, cocktails and wine as well as private dining options.