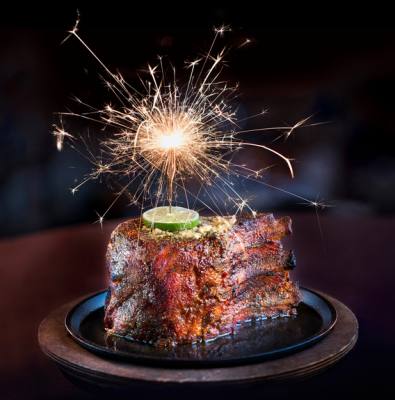 Show map
All Perry’s Steakhouse & Grill locations, including one at 9730 Cypresswood Drive, Houston, will celebrate the restaurant’s 40th anniversary with a special 79-cent pork chop offering on Friday, May 17.

Grant Hunter, Corporate Chef with Perry’s Steakhouse and Grill announced the special in a live video posted to the company’s Facebook page May 14.

“Perry’s is celebrating its 40th all year long with special promotions and offerings,” Hunter said in the video. “This Friday, May 17, all Perry’s Steakhouse locations—in honor of the year we were founded in 1979—the first 100 people before 11 a.m. lined up outside will receive our lunch-cut Perry’s Famous Pork Chop with potatoes [and] applesauce for only 79 cents. We appreciate your loyalty for the last four decades and we look forward to celebrating with you.”

Perry’s Famous Pork Chop is typically $39.95 at dinner and $14.95 during lunch. Hunter added that recipients of the special offering must be at least 21 years old or older.

The Spring ISD board of trustees at its June 22 special-called meeting approved a $433.6 million operating budget for the 2021-22 school year that includes more than $6 million in staff pay increases and equity adjustments.

"When we lost The Centrum to flooding during Hurricane Harvey in August 2017, we thought that was hard, but being forced to close down by a pandemic for over a year has been heartbreaking," said Nanci Decker, Cypress Creek Foundation for the Arts and Community Enrichment executive director.