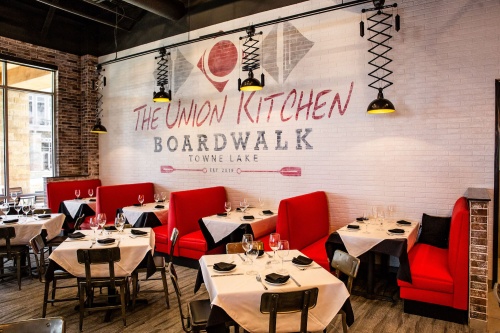 The Union Kitchen is now open at the Boardwalk at Towne Lake in Cypress.

Show map
The Union Kitchen’s newest location at the Boardwalk at Towne Lake, 9955 Barker Cypress Road, Ste. 104, Cypress, is in a soft opening phase. A grand opening is slated to take place later this summer, according to officials.

“We are so excited to finally open our doors in Cypress,” Gr8 Plate Hospitality owner Paul Miller said in a press release. “We like to say that The Union Kitchen is ‘the perfect union of good friends and great food,’ and we could not be more excited to be a part of the Towne Lake community.”

Between the 5,000-square-foot restaurant and the 2,000-square-foot patio, the eatery seats 330. The space overlooks Towne Lake and formerly housed Jaxton’s Grill House & Bar. Chefs James Lundy and Ed Roberts work from an open kitchen with a wood-burning grill.

Another first for The Union Kitchen at this location is the frozen drink menu—featuring a selection of beverages from an alcoholic ICEE machine such as the Jack Daniels Honey Lemonade ICEE and the Finlandia Vodka Lemonade ICEE.

During the soft opening, The Union Kitchen plans to offer a limited weekend brunch menu and ultimately launching a full brunch menu.