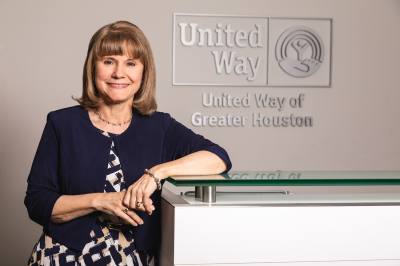 Anna M. Babin, president and CEO of the United Way of Greater Houston, announced her resignation May 23.

Show map
United Way of Greater Houston CEO Anna M. Babin announced her resignation today after 14 years at the helm of the nation's third-largest United Way in terms of fundraising.

The search for her replacement will be handled by a committee of the United Way Board of Trustees, led by board member and former Spectra Energy Chief Administrative Officer Dorothy Ables. The goal is to hire a new leader by March 31, 2020, with Babin remaining in the post until the new CEO is announced and takes over, according to a news release.

“Anna will be leaving the United Way in a strong position and our next CEO will be selected to build on that legacy of caring and trust,” said Jamey Rootes, chair of the United Way Board of Trustees and president of the Houston Texans, in the release.