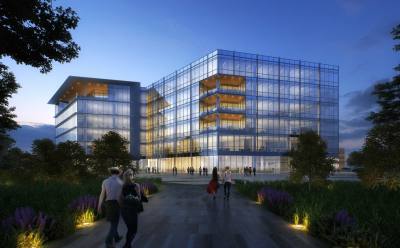 Show map
Independent Bank broke ground Jan. 17 on its new corporate headquarters located at the southeast intersection on Henneman Way and Grand Ranch Parkway in the McKinney Corporate Center at Craig Ranch. The 150,000-square-foot, six-story headquarters will be the city’s tallest building and allow space for Independent Bank’s anticipated growth, according to a press release from developer KDC. The $52 million headquarters will house between 1,100-1,300 employees, according to David Craig, the master developer of Craig Ranch.

David Brooks, chairman, president and CEO of Independent Bank, said construction will begin tomorrow and is expected to be done in December. www.independent-bank.com
SHARE THIS STORY