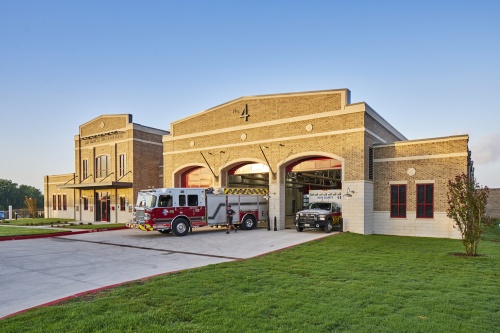 Show map
The city of San Marcos will hold a ceremony and open house Aug. 31 at 9 a.m., celebrating the grand opening of the new Fire Station No. 4, located at 1404 Wonder World Drive.

The $6 million facility replaces the original Station No. 4, located at 404 Broadway. The old facility, completed in 1982, reached the end of its useful life and is no longer the ideal location to provide service to the eastern areas of San Marcos, according to the city. The new location will greatly improve response capabilities on the rapidly growing east side of I-35.

The new facility has three drive-thru apparatus bays and sleeping accommodations for up to 10 personnel. It will house a fire engine or ladder truck, a brush truck and an ambulance. Fire Station No. 4, an 11,182-square-foot station, was completed in 17 months by San Antonio-based Teal Construction Co.
SHARE THIS STORY