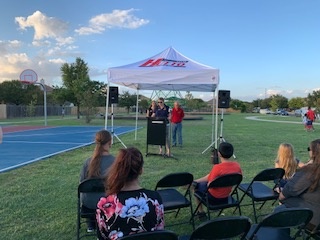 Show map
The city of Hutto celebrated the completion of its first bond-funded project, the Hutto Community Park at Country Estates, Oct. 1, which coincided with a National Night Out community event.

Community Park, located at 514 S. Pauley Drive, features renovations including a new shade structure and playground, improvements to its basketball court, additional sidewalks and improved access to its facilities, according to a city news release.

“We’re doing our best trying to make the vision the council has deemed for the
past couple of years, come to fruition,” said Mayor Pro Tem Tom Hines in the release. “It is only the beginning. There is unprecedented growth going on right now. We have new jobs coming, people will be staying here, they’ll be working here, they’ll be playing here and we’re seeing it today. We’re just starting and I’m glad to be a part of it.”

Additional bond projects planned for Hutto's parks systems include Hutto Lake Park, which will include improvements to parking, lighting and the installation of shade structures. Included in upcoming projects is Fritz Park, which will see renovations to its youth field, playground upgrades for ADA compliance and the addition of a splash pad, per the release.