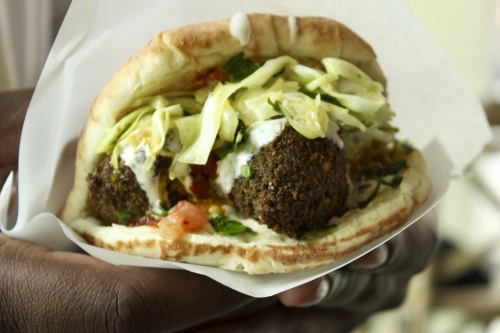 TLV, which serves Israeli street food, will open at Fareground in early March.

Show map
TLV, a restaurant serving Israeli street food, will open at the Fareground food hall at 111 Congress Ave., Austin, on March 7 in the space previously occupied by Easy Tiger, which will close Feb. 22.

TLV is a partnership between Berty Richter, chef and owner of the local food truck Hummus Among Us, and Kevin Fink, chef of Emmer & Rye and its Fareground outpost Henbit. Menu items will include hummus plates, falafel, Israeli pita and more.

Fareground has seen some turnover lately, with the closure of Antonelli’s Cheese Shop and Easy Tiger, which announced its closing Feb. 19, citing its split in early 2018 from ELM Restaurant Group, which manages the food hall, and wanting to focus on its recently opened location at the Linc in North Austin as well as its wholesale business.