GALLERY: Southwest Austin's Moviehouse & Eatery getting ready for May 17 opening 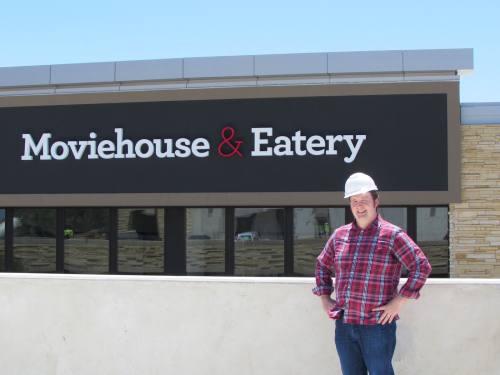 Chance Robertson, Moviehouse & Eatery's vice president of operations, stands atop a parking garage in front of the Lantana Place theater before opening in 2018.

Show map
Moviehouse & Eatery, a family-friendly dine-in movie theater chain with a location in Northwest Austin and three others in the Dallas-Forth Worth area, is set to open its fifth location in Southwest Austin at the Lantana Place shopping center May 17, according to Vice President of Operations Chance Robertson.

“We’re really excited to be back in Austin because this is where we started,” he said. “When you look at this area there are a lot of families, and we’re in good proximity to the city, Bee Cave and Westlake. There will be other businesses [in Lantana Place], but we feel like we’ll be a main attraction.”

“If you’ve been to the Northwest Austin theater, you’ll notice the evolution of [Moviehouse & Eatery] because that was our first,” he said. “Since we opened five years ago we retrofitted it in a lot of ways, went to [Dallas-Fort Worth] to open up three more locations, and each one of those is slightly different. This new one will be our best yet.”

The new location will feature the same menu as the Northwest Austin location, which includes pizzas; sandwiches and burgers; salads; tacos; appetizers; and snacks, such as popcorn. Beverages will include signature cocktails, wines, beers and soft drinks. Robertson said much of the food is scratch-made, and happy hour specials will also be offered.

Moviehouse & Eatery’s opening will coincide with the release of Marvel’s "Deadpool 2," Robertson said.