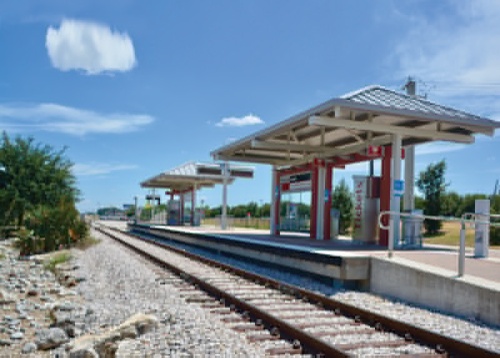 Each weekday, Leander resident Jeremy Long rides his bike to Capital Metro’s Leander Station, catches the MetroRail to get to his job in Austin and takes it back home at the end of the day. When he and his wife were looking to buy a house earlier this year, they found Leander was the best fit—they could afford it, and it had public transportation access into Austin, where Long, who is partially blind and unable to drive, works.

Without it, he said, “I wouldn’t have a good, stable way to get to work and back.”

Long is one of about 243 people who board the rail at Leander Station each weekday, according to numbers from Capital Metro. Many have said in meetings that they, like Long, moved to Leander because of its rail access into Austin. It is the only suburb in Central Texas to have this unique feature. However, limited service, ridership numbers and costs have drawn criticism in recent months, and city leaders are pushing for improved service.

In July, Leander City Council hinted it was considering beginning to withdraw from Capital Metro. An item on council’s July 18 agenda was to negotiate an agreement with an attorney for legal services regarding the “possible withdrawal” from the transit authority.

About 180 people showed up to the July 18 meeting, filling Pat Bryson Municipal Hall to capacity. Council voted to take the item off the agenda and schedule a workshop with Capital Metro. At the workshop, which took place Aug. 22, Capital Metro President and CEO Randy Clarke told council about Capital Metro’s plans to bring a new on-demand pickup service to Leander and to expand rail service to the city.

“I think we need to do this probably on a lot more regular basis than was done in the past,” Clarke said.

Mayor Troy Hill said he believes the meeting was informative, but there are still hurdles that need to be overcome.

“That’s the cost structure,” Hill said. “I want for them and for us to work together so we can get support from their allies in the Legislature to change the law.”

The transit authority began in 1985, when Central Texas voters were tasked with deciding whether to create a regional transit authority for Travis County and southern Williamson County to be funded by a $0.01 sales tax hike. The plan had its supporters and opponents. Some said a regional system was needed to mitigate traffic congestion in the growing area, while opponents were concerned about a lack of local control and argued transit authorities are responsive to political clout over consumer demand, according to an editorial printed in The Williamson County Sun prior to the election.

Lyndon Henry, a transportation planning consultant, was part of a task force that recommended the formation of the transit authority with the $0.01 sales tax levy.

“Leander was a much smaller city then,” Henry said. “The vote was not terribly exciting to people and didn’t have much of a turnout.”

Henry, who served on Capital Metro’s board from 1989-93, said Capital Metro has been a positive investment for Central Texas since its formation but also needs improvement. He said the authority faces low ridership and lacks enough frequent service.

“In Leander, they can’t get any service from MetroRail on Saturdays, and for them to have to wait so long between trains and so forth—it’s very inconvenient to say the least,” Henry said.

The state imposes a 6.25% sales and use tax, while local taxing jurisdictions can impose up to a 2% sales and use tax for a maximum combined rate of 8.25%, according to the Texas Comptroller’s Office. In Leander 1% of sales tax generated within city limits goes to the city, while the other 1% goes to Capital Metro.

In fiscal year 2017-18, Capital Metro received around $5.1 million in Leander sales tax revenue while spending about $9.3 million to service Leander, according to Capital Metro.

Local sales tax can be put to other uses, if voters approve.

After Cedar Park voted to withdraw from Capital Metro in 1998, voters in the city opted to dedicate the sales tax funds originally paid to the transit authority to economic and community development. In the last two decades, the funds have enabled the city to recruit and retain businesses and create community enhancement projects, according to city spokesperson Jennie Huerta.

Some think Leander’s sales tax could be put to better use. Hill has been a proponent of lowering the amount of sales tax cities contribute to Capital Metro.

“Paying half our sales tax in the system puts us at a competitive disadvantage when competing with cities around us for companies’ relocations,” Hill said during the July 18 council meeting.

Others say Capital Metro itself attracts economic development. In 2005, Leander City Council created the city’s transit-oriented development, a district that includes the Capital Metro Leander Station and is intended to encourage pedestrian-friendly growth.

Pix Howell, who co-sponsored a study to determine if Leander would benefit from creating a TOD, said transportation contributes to growth.

“The rail is economic development,” Howell said. “There are people that move out there because of the rail.”

Today, the TOD includes Austin Community College’s San Gabriel campus and St. David’s Emergency Center. Northline, an 115-acre, mixed-use development, is planned for the TOD near the rail as well.

During the Aug. 22 workshop with Capital Metro, Hill said he thinks lowering the percentage of sales tax cities must contribute to the authority would encourage other cities to join Capital Metro, which would ideally increase ridership and revenues.

“I know from talking to mayors in other cities that the $0.01 for a lot of cities, especially a city of our size, is a nonstarter,” Hill said. “Even if it was $0.0025, you’d have a better chance of getting a city like Cedar Park to get in.”

By state law, members of the transit authority must pay the same rate. Lowering the rate would be up to the authority’s board of directors. Member cities such as Leander voted to join Capital Metro; they do not have contracts that can be renegotiated.

Decades after leaving Capital Metro, Cedar Park is in the middle of a transit study to evaluate transportation needs. The city conducted a survey in January and February in which 64% of respondents said they believe there is a need for a commuter rail in Cedar Park. There have been no specific conversations about Capital Metro during the study, though, according to Fran Irwin, Cedar Park’s director of community affairs.

Estimated costs for various transit scenarios are currently being determined in the study, and next steps will be taken from there, according to Irwin.

An app-based service called Pickup is planned to launch in Leander in November. Dottie Watkins, Capital Metro’s acting chief operating officer, told Leander City Council during the Aug. 22 workshop the service enables residents to use an app or make a phone call to request a vehicle. The vehicle takes customers from one point to another in a designated zone.

Council Member Kathryn Pantalion-Parker said during the workshop she thinks Pickup will benefit residents, since so far, Capital Metro has helped people get to Austin but not to various points within Leander.

Council members have expressed concern about Leander getting enough return on its investment in Capital Metro. The MetroRail Red Line launched in 2010 and runs 20 trips daily Monday through Thursday and 32 trips on Fridays, according to Watkins. The two bus routes that service Leander offer 62 weekday trips and 30 Saturday trips each week.

“I know we have a lot of comments that we need more service, not less, but we know that we do have empty trains,” Pantalion-Parker said at the workshop. “There’s a cost related to that. Is it a situation that we just need more planned service? Or, how do we come up with a better return on investment?”

Watkins responded and said Capital Metro does not experience empty trains. In the spring, the Leander Station saw 472 average weekday boardings for buses and the MetroRail, according to Capital Metro data. Clarke said during the meeting the ultimate way to improve the return on investment is increased ridership.

“We are the only service that the more people use it, it becomes more efficient, versus a road that actually becomes less efficient,” Clarke said.

Several improvements are in the works for the MetroRail. Starting in January, Watkins told council Capital Metro plans to add Saturday rail service to Leander starting at 4 p.m. The transit agency also has plans to expand midday and evening rail service to Leander during the week. Clarke said Capital Metro is also working on running a train possibly 45 minutes to an hour later than it currently runs in Leander Monday through Thursday.

The city of Leander does not appear to be leaving Capital Metro any time soon. For Long and other daily riders, that is a good thing. He said he sees ridership fluctuate depending on the day, but many people rely on Capital Metro’s services.

“Having it taken away would be a huge blow for a lot of people,” Long said.