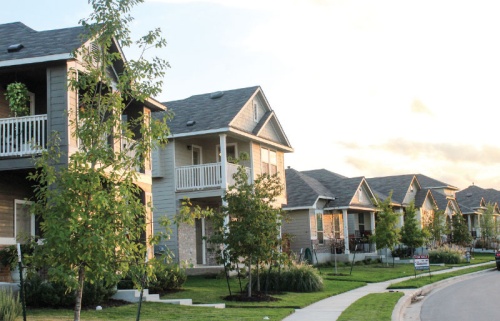 The Oak Creek public improvement district was created in 2014.

Jesse Wells said that when he bought a home in one of Leander’s public improvement districts, or PIDs, he was unaware of the costs.

PIDs are a tool for developers to finance or reimburse the cost of public improvements, such as landscaping, sidewalks, roads, artwork, water facilities and more, according to Texas Local Government Code.

Unless paid off in a lump sum, PID payments continue for 30 years after the first assessment, Leander Finance Director Robert Powers said. Interest rates ranging from 4.125%-5.875% are accrued over that time, he said.

Leander City Council has approved three PIDs since 2014—Oak Creek, Deerbrooke and Crystal Springs. At a meeting Aug. 16, some council members indicated their uneasiness with the way PIDs are implemented after several residents said they were not properly informed of what they were buying into when they purchased their homes.

“City Council has expressed extreme dissatisfaction with the PIDs that are coming forth,” Leander City Council Member Andrea Navarrette said at the meeting. “It just sounds like they’re still not [informing residents]. There has got to be some kind of tool we as council can put in place to make [the developers] abide by.”

Council directed staff to speak with legal consultants about what measures could be implemented to require further notification of homebuyers when purchasing houses within PIDs.

As of Oct. 2, Powers said there have been no updates, but the city would continue to look for ways to improve communication among Realtors, builders and potential homebuyers.

Patrick Bourne is a senior manager with Development Planning and Financing Group, a firm that assisted with the creation of all of Leander’s PIDs. He said many development projects are not feasible without a financing mechanism due to increased development requirements, homeowner expectations and infrastructure costs.

“One of the key reasons developers are attracted to PIDs is because PIDs provide low-interest, up-front construction financing for infrastructure costs,” Bourne said.

Leander’s first PID was Oak Creek, created in 2014. Deerbrooke’s PID was started in June 2017, followed by Crystal Springs’ PID in March this year, according to city documents.

In each case council approved an annual service and assessment plan that identifies the costs of projects within the PID. The city issues bonds to fund the public improvements and pays for those bonds and administrative costs by levying the annual installments from homeowners within the district, Powers said. He said the assessments are billed on a property owner’s tax bill by the Williamson County Tax Office.

“The developer starts the construction process building those improvements, and periodically, they ask for reimbursement,” Powers said. “If they’ve done what they said they’ve done, then we send a request to the trustee [a bank] to release payment to the developer from those bond funds.”

Bonds worth $5.475 million were approved for issuance earlier this year for the Crystal Springs PID, which is under construction, to build roadway, drainage, wastewater and other improvements, according to city documents. The Oak Creek PID’s $5.2 million in bonds were approved for issuance in 2014 to finance sewer and drainage facilities, entry features, masonry walls, landscaping, a fountain and more, according to the documents. The Deerbrooke PID’s bonds, $11.185 million approved for issuance in 2017, are intended to fund roadway improvements, storm drainage systems, sidewalks and additional construction.

The homeowners’ installments can range from $503.93-$1,858 per year depending on the neighborhood and lot size and continue to be levied until the total assessment is paid off.

“The developers in all three of our PIDs has had to put in some of his own funds to complete the improvements,” Powers said. “The bonds don’t cover 100 percent of the projects, so it’s a little cooperative effort there.”

When PID bonds are funded through annual payments, they earn interest and are charged administrative expenses, according to city documents. For example, a home in the Oak Creek PID with a debt principal of approximately $9,389 would be charged around $10,579 in interest, plus administrative costs at almost $2,788.The total PID charges for that homeowner would then be around $22,756, according to city documents.

“The investor community [for PID bonds] is small, because it’s a higher risk and a less common product, so those type of investors demand a higher interest rate,” Powers said at the August council meeting.


BUYING INTO THE COSTS

Danny Evatt is a Realtor and homeowner in Oak Creek. He said PIDs were originally created to help spur development in areas that developers were not interested in, which he supports.

Evatt said he knew he was purchasing a home in a PID and that he was not deterred by the district. However, he said future homebuyers may be reluctant to buy his home in the future because of the debt.

“We felt like we got a good price because we negotiated,” Evatt said. “We felt comfortable that it was a trade off with us ... but most people … have no clue, and that’s a shame.”

Dennis Ciani is the marketing manager for Pacesetter Homes—the builder of Oak Creek. He said information about PID payments is provided when a homebuyer is executing a purchase agreement with a sales representative.

Council Member Shanan Shepherd said there are multiple levels at which PID information must be explained—to agents, taxing entities, and title companies and attorneys—so they can understand how to share the information.

“We basically gave [developers] permission to [create a PID] and trusted that they would convey information, and it hasn’t worked that way, so I feel a responsibility to try to make that better,” she said.

Shepherd, who is also a Realtor, said PIDs were pitched to council as a way to make housing more affordable.

“That’s not what it turned out to be; it’s not more affordable at all,” she said. “Houses are still the same price.”

Shepherd said she would not approve another PID if it came before Leander City Council in the future.

“I know a lot of developers are saying it’s difficult to get financing for these big projects, so it’s a funding mechanism,” she said. “But I’m not really okay with that if the end result is the consumer gets the bad deal.”