$15M in city funding allocated for Northline project in Leander 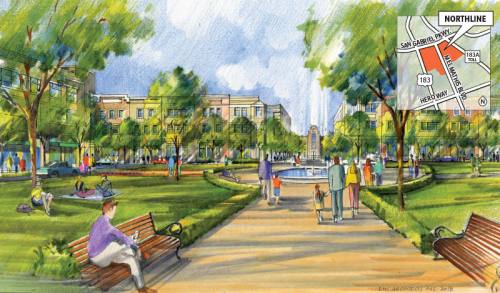 A rendering shows what a public park within Northline could potentially look like.

A project planned for Leander could bring an urban town center with walkable shopping, dining and housing to the city over the next decade.

After months of workshop meetings and discussion about the project, Leander City Council approved up to $15 million in funding in June for the creation of infrastructure in the development, which is called Northline.

Created by Tynberg LLC, Northline is set to be a walkable town center on approximately 115 acres against the south side of San Gabriel Parkway between US 183 and Toll 183A.

“We are essentially building the city’s new downtown,” Tynberg LLC Principal Alex Tynberg said. “We have master-planned the 115 acres to be a dense, urban, mixed-use development.”

The approved development agreement sets the terms for how the city of Leander would fund the creation of infrastructure for the project, including up to $15 million in bonds issued to Northline to help pay for public improvements, such as water infrastructure and parks.

“That money is being spent directly on the city’s own infrastructure in its downtown location,” Tynberg said. “The city will be owning the land where all its infrastructure and all of its civic spaces will be located for this city investment.”

The total infrastructure costs for the project’s first phase will fall between     $23 million and $27.2 million, Tynberg said. Leander spokesperson Mike Neu said the city’s funding will be reimbursed through the tax increment reinvestment zone, or TIRZ. TIRZ funds will cover the annual bond debt service payment, while additional TIRZ funds could possibly go to the developer, he said. Infrastructure costs not covered by the city will be paid for by the developer, Tynberg said.

Providing public funding for Northline infrastructure at the start of the project differs from the usual way Leander’s TIRZ functions. The city created the TIRZ to help finance development in the TOD by reimbursing developers who create public infrastructure. As developments rise in the TIRZ, property values are expected to increase. Typically, as property taxes are generated over time, tax revenue in the TIRZ is used to pay off the cost of infrastructure development.

The decision to move forward with a public partnership on the project came at a time of change in city leadership. New Leander council members Marci Cannon and Christine Sederquist were sworn into office two weeks before the June 7 meeting when the funding was approved, and both voted against it.

The city later elected a new mayor, former Council Member Troy Hill, who has indicated disapproval of the decision for public funding being allocated toward the project up front.

Hill said he was more comfortable with the way the TIRZ is usually financed, but now that council approved the funding, he looks forward to working to make the project the best use of tax dollars.

“My thoughts about the project from the beginning were that if somebody’s bought land and they want to do a project, and they don’t need anything from the city, hopefully we can work together and come up with the best project,” Hill said.

Originally, Northline was slated to be around 70 acres but grew after Tynberg bought 45 more acres in April.

Architect David Schwarz, who is working with Tynberg, said at a Leander Planning & Zoning Commission meeting on May 24 that adding the extra acreage means the development will have control of Mel Mathis Boulevard and can rework it as a local street that would function as “Main Street.”

Mel Mathis could run up the project until it meets a public square, at which point it would split to run along the sides of the square. At a zoning meeting in June, Schwartz presented initial renderings of the space, which he said draws inspiration from “classic American” town squares with retail and restaurant components along the first floor of buildings surrounding the square. Upper floors could contain offices, and the area near the square could also include a hotel and housing.

While in the area there may be an oversupply of apartments (see Page 28), Tynberg said he believes his project’s housing will perform well, given there are no major recessions or changes in construction costs.

“We will be delivering a very unique product to the area with our urban, downtown, environment and we believe that there will be no comparison to the Northline community and so higher rents can be supported,” he said.

Parks are also incorporated throughout the proposal among residential, retail and office areas. Office space is slated to run along Toll 183A and San Gabriel Parkway.

“I want something that’s going to be an economic powerhouse,” he said.

To analyze the possible economic impact of Northline on the city, Leander hired Joe Minicozzi of Urban3. Minicozzi works across the U.S. analyzing the economic return of developments on cities, Assistant City Manager Tom Yantis said.

“We wanted to get an outside opinion about what it meant to make an investment in this area, in the infrastructure,” Yantis said June 7, when Minicozzi presented his findings to council.

Minicozzi said the city may expect an estimated $260,095 in retail taxes per acre in the project. He also said at full buildout, Northline’s average taxable value per acre could be around $9.5 million.

“That money you’re putting in [in infrastructure improvements] is essentially yielding hundreds of millions of dollars of productivity,” he said.

Tynberg said the creation of infrastructure for the first phase of Northline will likely begin at the end of this year or in the beginning of 2019. The infrastructure improvements could take between 10-15 months to finish.

“Once all of that is complete, we’ll be ready to go vertical,” he said.

Broken into three phases, Tynberg said the timeline of his project will be market-driven. The first phase is slated to contain around 250 multifamily units, 250 garden apartments, a less dense multifamily option, and 50 townhomes, according to the developer. It also is planned to have retail, a movie theater, dining, office, medical and hotel uses.

“[The plan] is going to shift and change and get modified,” Tynberg said.

The second phase could start five to seven years into the project, and then it may be a decade before the final phase begins, he said.

While Northline’s blocks will eventually need parking structures to accommodate visitors, Tynberg said the market does not support it at this time. Because of this, parking will initially be placed on the surface and later altered to include structured parking.

At full build-out, the project could have over 1,500 multifamily units and around 600 garden apartments and 300 townhomes. Retail and restaurant areas would nearly double from the first phase, and office, medical and hotel space would grow as well.

Once finished, Northline would be unlike anything Leander has seen so far. Tynberg said he knows not all Leander residents want this type of project to come to the city, but the project will bring benefits to all residents.

“[Northline] will become a financial asset that will create surplus economic revenue for the city,” he said. “What this project is hoping to do is enable the city of Leander to continue to support their suburban [and] rural areas ... [by generating] surplus revenue to support those other development areas.”

Leander resident Joel Shnider said on Nextdoor that he does not think mixed-use will benefit Leander as much as retail and commercial developments.

Another resident and Nextdoor user, Kris Day, said he is “all for” the development as long as it contains the expected retail and is east of US 183, as planned.

“Bring on the businesses, he said. “I am hoping this means more restaurants and good shopping areas, without having to go to Cedar Park or Austin.”