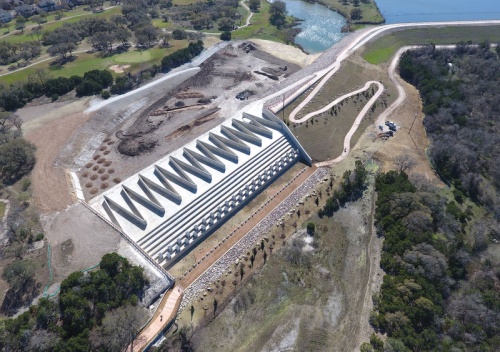 A section of the Brushy Creek Regional Trail, which has been closed since June 2016 from Brushy Creek Lake Park leading into Champion Park and along the adjacent dam, officially reopened with a ribbon-cutting ceremony April 18.

DAM UPDATES
The trail’s reopening followed the substantial completion of the dam modernization project in March, according to Chris Tschirhart, senior project manager for the Upper Brushy Creek Water Control and Improvement District. Minor work for temporary irrigation will continue in April and potentially May, he said.

“The dam has been modernized to meet the current design standards and that means it can safely pass the design flood [82 percent the maximum probable flood for this dam] without overtopping, so that’s beneficial for people who are living downstream,” he said.

He said that while the dam was in good condition, its hazard classification was changed to high-hazard a few years ago because of the developments that were built downstream.

When the area’s dams were constructed in the 1950s and 1960s, they were considered low-hazard because the surrounding land was agricultural, Tschirhart said. Now that neighborhoods of people live downstream of the dams, the district was required to modernize them, he said. The trailside dam is the 20th of 23 dams the district has modernized since 2003, he said.

TRAIL PHASE DELAYED
Separate from the dam modernization project and trail reopening, the Capital Area Metropolitan Planning Organization reduced the federal funding awarded to the Brushy Creek Regional Trail Phase V project by about $330,000 at a meeting March 5 due to challenges in purchasing right-of-way.

The CAMPO board approved the trail amendment to its Transportation Improvement Program for Williamson County’s portion at the meeting, decreasing the funding from around $1.3 million to around $1 million, as well as Phase V's distance from 2.7 to approximately .93 miles in length.

The revised scope for the grant will still begin near Creekside Plaza but end around the intersection of Sam Bass Road and Meadows Drive along the creek, opposed to the originally planned extension near Hairy Man Road, said Connie Odom, Williamson County public affairs manager.

“The .931 section of trail is the most expensive because this shorter phase of development encompasses the bulk of the higher cost infrastructure, such as a pedestrian bridge and boardwalks, and requires more intense site access, clearing and fine grading,” she said.

Construction is planned to begin in late fall of this year or early 2019 with federal funding and money from Williamson County voter-approved park bonds, she said.

SEGMENTED PROJECT
Since all of the necessary right-of-ways were not acquired, Williamson County plans to construct the project in at least two segments, according to CAMPO documents. The trail will eventually span at least 20 miles connecting entirely from Cedar Park to Round Rock and Hutto, Odom said.

“We will continue working with property owners to acquire right-of-way access for this trail,” said Terry Cook, Williamson County Precinct 1 commissioner. “Due to the number of stakeholders involved, the process can be lengthy.”

She said the county’s goal is to complete this section of the Brushy Creek Regional Trail in Round Rock by late summer or early fall 2019.

A new phase and budget is expected in the future to connect the remaining distance, said Odom.
“At this time we do not know where specifically the funding will come from for the gap portion of the trail,” she said “Possible funding sources for future phases include the 2013 bond money and potential grants.”